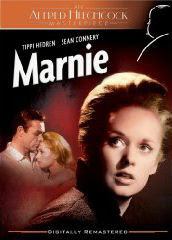 It only had 2½ stars, but I think it deserved a much higher rating. It was so much better than Suspicion, North by Northwest and Rope, IMO. It held my attention the entire time! I wanted to know why Marnie was so afraid of thunderstorms and why she freaked out every time she saw the color red.

The movie starts out with a black haired Tippi Hedren working for a man named Sidney Strutt. While she's there, Sean Connery's character (Mark Rutland) meets her. Soon after, she steals money (maybe $10,000?) from Strutt's safe and goes to her hotel where she changes her hair color to blonde.

She leaves town to ride her horse and then visit her mother who comes across as a fundamentalist Christian who has no love for her daughter. Marnie has spent her life trying to gain her mother's approval, which is one of the reasons she steals. She always sends money home to mommy and buys her expensive gifts, but to no avail.

Marnie gets another job, another new hair color, and another fake name.

The new job is at Mark Rutland's office. He knows immediately who she is and starts paying particular attention to her habits (to ward off another robbery) while falling in love with her at the same time.

After Marnie is introduced to Mark's father and SIL she freaks out. Steals more money and tries to run away. 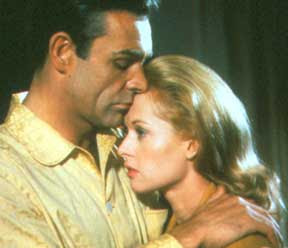 Mark finds her and basically blackmails her with "Marry me or go to jail." Of course, she marries him.

Mark's SIL, Lil Mainwaring, is jealous/suspicious of Marnie. She learns that not only has mark spent $42,000 on a new diamond ring for Marnie, but he's also sold some stocks (or a bond) and withdrawn a substantial amount of money to pay off some man named Strutt and to pay for his South Seas honeymoon after his whirlwind marriage to Marnie.

While they are on their honeymoon, Mark finds out that Marnie has some serious sexual hangups. She claims that she doesn't like to be touched. After a couple of weeks, he eventually gets tired of his sexless marriage and...I don't know if he raped her or not, but the next morning, Marnie tries to kill herself by jumping into the pool on the cruise ship.

Mark - Why didn't you just jump into the ocean?
Marnie - The idea was to die, not to feed the damned fish.

Anyway, I think there is some witty dialogue in the movie. Tippi Hedren is a much better actress than I had previously given her credit for being after seeing "The Birds". Her voice (reminiscent of her daughter, Melanie Griffith's, voice) is a little irritating, but maybe that's just me.

It was nice to see a young Sean Connery, even though I prefer the older "Hunt for Red October" version. ;-)

I really liked this movie. It's up there with Rear Window for me as an Alfred Hitchcock great.

Definitely check it out if you see it on your schedule at TCM.

You can watch the original trailer (which pretty much gives away the ending, if you ask me) to see if it's something you'd like to watch. :-)