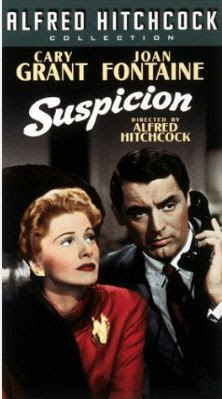 ast night I decided to record "Suspicion" by Alfred Hitchcock. It had 3 stars (or maybe 3½?). It starred Cary Grant & Joan Fontaine. I don't think I've ever seen Cary Grant in a movie before and I'd never heard of Fontaine. But it was Alfred Hitchcock. I've enjoyed several of his movies including Rear Window, The Birds, Psycho.

I have to say that this was the longest 90 minutes (approximately) of my life. It felt like 3 hours.

It starts with Lina McLaidlaw (Fontaine) on a train. She looks like a librarian. Enter the dashing Johnnie Aysgarth. When the conductor comes around, we find that he has a Third Class ticket but he's sitting in First Class with Lina. He doesn't have the money to pay for the upgrade, but he "borrows" it from Lina.

Then he sees her in town while walking to church with 2 other women and they stop by her house to invite her. When they all get to the church, Johnnie takes Lina off for a walk.

Lina is a very bookish woman. Her parents think that she'll die an old maid. So the attention from this gorgeous man sweeps her off of her feet.

Within one week they are professing their love to each other and he asks her to marry him. They elope and she is taken on a whirlwind honeymoon around the world. Paris, Italy, Monte Carlo, etc.

When they get home from the honeymoon, Johnnie brings her to the house that he's rented and had furnished for her. It's a very grand house.

As soon as they get home, however, Lina finds out that Johnnie is broke. He says something like "Why shouldn't we live in style? When your parents die we will." Not that crass, obviously, but it sows the first seeds of doubt in Lina.

Throughout the movie, people tell Lina about Johnnie's gambling habit. They tell her that he's a "playa". Her father tells her that he's been kicked out of a country club for cheating at cards or something scandalous. Johnnie sells the 2 antique chairs that her father had given to her as a wedding present. They had been in her family for several generations. She also learns that he borrows money that he can't pay back and that he'd been fired from his job for stealing £2000. The only reason he wasn't prosecuted is because he was working for his cousin.

At some point, Johnnie's good friend Beaky (Nigel Bruce) stops by for a visit. I believe he was the first person to tell Lina about Johnnie's gambling. On another visit from Beaky, he drinks some brandy even though it's dangerous for him. Johnnie tells Lina not to call a doctor when Beaky starts coughing and looking like he might have a heart attack. He says "He'll either be all right or it will kill him. One of these days it will."

Johnnie comes up with a scheme to buy some land, sell half of it, and develop the other half (with Beaky's money). Finally, Johnnie decides that the deal is no good, so he makes Beaky go with him on a trip to see the land. Lina worries the entire time that Johnnie will kill Beaky. But when they both come back alive, she learns that Johnnie had actually saved Beaky's life by stopping him from backing over a cliff.

One of Johnnie's friends is a Mystery writer. Her brother is a coroner (it was interesting that they were talking about forensics in 1941. I don't know if they had DNA, but one of the characters said that even a single hair could be traced back to its owner...)

So anyway, Beaky has to go to France to cancel the land deal. He asks Johnnie to go with him, but Johnnie only goes as far as London so that he can look for work.

While Johnnie is still away, the police (Inspectors in Britain) stop by and show her a news article about Beaky dying. Apparently, he'd bet the man he was with that he could drink a large snifter of brandy. The waiter, who didn't speak good English, said that Beaky's companion was someone named Allbeam or Ollbeam. Beaky always referred to Johnnie as "Old Bean".

When they have dinner with his writer friend & her coroner brother, they get into a discussion about poisons. Johnnie is very interested in the only untraceable poison that the Dr. mentions in passing.

Lina starts to fear that Johnnie will kill her because she'd found a letter from the insurance company stating that the £5000 loan that he had requested couldn't be given unless his wife died. So when he brings her a glass of milk one night, she refuses to drink it and decides that she needs to go stay with her mother "for a while".

My xanax is kicking in.

The only good thing about this movie, IMO, was looking at Cary Grant. He was a good looking man. I might check TCM for some more of his movies and see if I like those better? I don't know.

For a Hitchcock movie that won an Oscar and had 3 stars, I was disappointed. It felt longer than The Aviator with Lionardo DiCaprio. But that movie was at least interesting.

Suspicion was a whole lot of buildup for a crappy, sappy, ridiculous ending. No payoff at all.

If you've seen it, I'd be interested to hear what you thought. I don't ever need to see it again. I would not recommend you rent it or even waste space on your DVR recording it. :-(

All photos are from IMDb.com