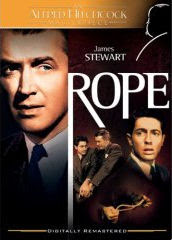 was doing a search on my DVR schedule for movies by Alfred Hitchcock and I found "Rope" with James (Jimmy) Stewart, so I recorded it.

The plot, according to IMDb.com is:

Two young men strangle their "inferior" classmate, hide his body in their apartment, and invite his friends and family to a dinner party as a means to challenge the "perfection" of their crime.

Before the movie, the 'TCM Guy' said that Hitchcock had wanted to do a one take movie, but at that time (1948) movie cameras only held about 10 minutes of film so he had to do 10 minute takes and cut them together. After the movie, the 'TCM Guy' said that 4 or 5 takes had to be re-shot because the color of NYC's skyline didn't match that time of day. (The story takes place from late afternoon to early evening.)

I would be interested to know how long it took to shoot that movie since all the actors had to do steady 10 minute takes. You'd think they could do it in a short amount of time. Like a week as long as the weather cooperated? It looks like a play because there is just one setting.

Anyway, the movie was okay. I wasn't familiar with any of the actors except Jimmy Stewart. Maybe that's why I'm kind of lackluster about it? Not enough Jimmy Stewart, LOL.

It starts with a view of the street, then it moves to a window with the curtains closed. We hear a man scream.

They put the body inside a trunk and hold a dinner party. They serve dinner buffet style on the trunk containing David's body.

Among the invited guests are David's father, aunt & fiance. Also, David's former best friend and old teacher of all of theirs, Rupert Cadell (Jimmy Stewart). Rupert is the teacher who taught them the idea that there's nothing wrong with murder if the person being killed is inferior in some way. There is a long & spirited conversation about this theory at the dinner party.

No one knows where David is. His father had said that David was coming to the party early and he should have already been there. His fiance says that she had spoken to him earlier and he told her that he would meet her at the party. Brandon & Phillip claim they hadn't heard from him since inviting him to the party.

After the dinner party, Cadell is handed a hat that looks like his, but has David's initials on the inside of it. It is then that he begins to suspect that Brandon (the arrogant one) and Phillip (the jumpy one) have done something with David and that is why dinner was served on the trunk instead of the dining room table.

It's an interesting premise. I suppose that it was executed well considering the limitations (technology & actors) that they had in '48. I'd be interested to see a remake of this to see if I would be more excited about it than this.

Watch it if it happens to be on, but I wouldn't go out of my way to see it if I were you. I don't need to see it again.

You can see the original trailer for Rope at TCM's website. :-)