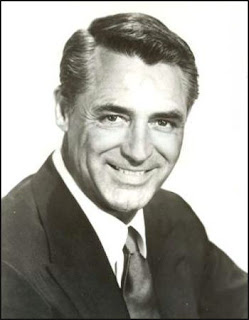 ast week I watched Suspicion, an Alfred Hitchcock movie with Cary Grant. I didn't like that movie, so I wondered if I'd like Grant in something else. I had seen "Operation Petticoat" listed on TCM's schedule, but it's a comedy and comedies aren't usually my cup of tea. So I had to wait for a drama or suspense to see if I'd like him. I know I like looking at him, but I mean if I liked his acting, LOL.

BTW, I found The Ultimate Cary Grant Pages. Go there for hundreds of photos, a bio, etc. if you're really a fan. After watching Suspicion & North by Northwest, I couldn't help but wonder if Grant was a closet homosexual. I mean, the way he moves his hands & whatnot is very effeminate, IMO. Not that it matters. He's dead. And even if he were still alive, he'd be too old & too famous & too far away for me. I still wanted to know. Diane Cannon says he's not. She's slept with him & borne a child with/for him... I still have my doubts.

North by Northwest is another Hitchcock movie.

Grant plays Roger Thornhill, an advertising executive in Manhattan. He's mistaken for an FBI (or CIA) agent by some bad guys and is kidnapped. They repeatedly try to kill him, in various ways. Thornhill alternately runs from the police and to the police because he's accused of a murder that he didn't commit. When the bad guys are near, he willingly gets arrested just to get away from them.

So...there are some unbelievable things in this movie. Like Thornhill is forced to drink an entire bottle of bourbon (or something) and is still able to drive. Not well, mind you, but well enough not to drive off a cliff and kill himself.

Thornhill meets a woman named Eve Kendall (Eva Marie Saint) when he boards a train with no ticket and 1) she helps him hide from the police 2) she lets him spend the night in her room & makes out with him.

This movie was released in 1959. I didn't think they had such open sexuality back then. There was one line that Miss Saint had to dub. I tried to mute it and read her lips to see what she had really said, but no success. Something about having sex with a full stomach.

Overall, I liked the movie. I'd watch it again. But the ending, once again, was a letdown. I guess after 160 minutes, Hitchcock decided just to wrap it up even if the ending was a little too neat & cutesy.

My major question has been answered, though. I like Cary Grant. Even though he has an odd accent. It's not British, and it's not the kind of "Almost British" accent that a lot of actors had in the black & white movie days.

I'm writing this yesterday & my back is hurting so I'm out!

Watch it if you want to. Or don't.