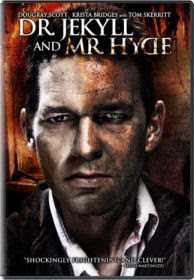 he other day at Wal-Mart, we got "Semi-Pro" with Will Ferrell (funny, but not as funny as Talladega Nights) and I wanted Dr. Jekyll & Mr. Hyde.

I like Sci-Fi movies as long as they aren't produced by the Sci-Fi Network. All of those movies are cheesy & I only watch them when I've watched everything on my DVR and I don't feel like watching a "real" movie.

Of course, I've seen Jekyll/Hyde in "A League of Extraordinary Gentlemen" and "Van Helsing", but this one didn't seem like it would be quite the same. For one thing, Hyde isn't gigantic. It's just a change in personality and mannerisms. Hyde is like... a homicidal Jack Sparrow, LOL.

I fell asleep the first time I tried watching it. But in defense of the movie, I had been up since 4 am that day. We had gone to the post office & Wal-Mart & done something else that required me to do more than lay on my bed or sit in this chair so I was tired.

I finally watched it last night.

I like Dougray Scott. I remembered his face from somewhere, but I had to go to imdb.com to find out exactly where. He was Susan's BF on Desperate Housewives and he was Thandie Newton's Ex in Mission Impossible 2.

Anyway, the writer gave the Jekyll/Hyde story a different spin. He explained WHY Jekyll was doing those experiments. Dr. Jekyll had visited Africa or somewhere and met a witch doctor who said that a particular flower induced an altered state. Jekyll's interest was the possible connection between this 'other' personality and illness.

After there have been a few unsolved murders in the city, Dr. Jekyll thinks that he might have done them. He asks his closest friend, played by Tom Skerritt, to recommend a lawyer for him. Jekyll goes to her & confesses to the murders and says he wants to plead guilty and be sentenced right away with no trial.

So, of course, she just think Dr. Jekyll is crazy and doesn't believe his story without doing some investigation & research about multiple personalities.

One thing we find out in the story is that Dr. Jekyll and Mr. Hyde have different DNA.

Same body, different DNA to go with the different personalities.

Yes, the ending was predictable, but I enjoyed the ride anyway. It's more interesting than any of the slasher flicks and most of the crap that is supposed to pass for "thrillers" these days. The only thing that sucked is that there are no captions. Not on the DVD, and the captions on my TV wouldn't work either. But you might hear better than I do, so that might not bother you.