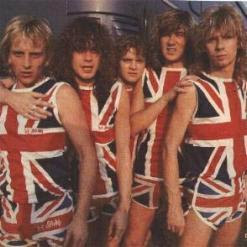 his week's song is a song that brings back memories.

But I still like the song "Pour Some Sugar on Me" by Def Leppard.

When I first moved here (here being the south), I was 15 years old. I got my first crush at my new high school. A white boy who shall remain nameless. I don't remember if I wrote him a note telling him that I liked him, or told one of his friends to tell him.

I do remember that he sent me a note saying that he liked me as a friend, but he didn't like me "that way". But his black friend did.

That was when I first thought "Oh, so it's going to be like that down here? I'm only allowed to like black guys?"

The reason I remember this song in association with that boy is because he told us (a group of girls) that he liked girls who looked like a particular girl in the video.

I'm not bitter, though.

I mean, I hope he's gotten fat and bald, but I hope he's still alive and happens across this blog and remembers how he rejected me.