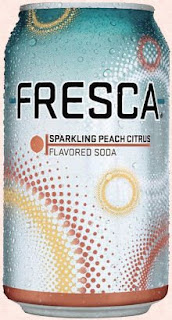 long time I switched from sugar to Splenda for everything except baking. I made the switch because I realized that I was drinking about 2 cups of sugar a day in my Kool Aid. But before I made the switch, whenever Evan and I went to Mommy Dearest's house for dinner, I had to drink diet sodas.

They always tasted odd. Whatever it was, it was nasty.

One weird thing is that when I was growing up, she only drank Pepsi and Sprite before she found out she was diabetic. After that, she said she liked Sierra Mist better than Diet Sprite (Now called Sprite Zero).

I HATE cola drinks. They make my teeth feel dirty. I don't know why. But I can have smooth, glassy feeling teeth & then after I drink a cola, they feel furry. Like after I pet a dog, my hands feel like they have an oily coating until I wash them.

Whatever, I'm not talking about my psychoses. The point is that I never finished the sodas and she would complain that we were wasting them. I still don't like Sierra Mist, and I don't do cola. She'd go ON and ON about it. I finally started bringing my own drinks so I wouldn't have to hear her mouth if I didn't finish it. Not to mention that I KNEW that I would like whatever I was drinking.

I'd almost rather be parched than drink something I don't like.

So when she came by last Thursday with her Chinese food, she had the option to drink one of my diet drinks. I have Peach Citrus Fresca, Sprite Zero, Tropicana Orangeade, Diet Ginger Ale & Evan has Diet Barq's Root Beer. She picked the Fresca.

After she left, I noticed that she had left her can of unfinished soda on my bookcase. So I called her.

Me - You didn't finish your soda.
MD - LOL! I knew that's why you were calling, to get me back for when I used to say that to you.
Me - Well, I'm NEVER giving you one of those sodas again!
MD - Good! It was too peachy.
Me - I just can't believe you wasted one of my sodas. Those are my favorite sodas. And I still haven't forgiven you for eating my last Reese's cup!
MD - Well, eating only one will mess up your mouth!

She thinks that if it's sold with 2, you have to eat both at the same time.

I will not get into that.

Let's just say that I will never let her forget that she wasted a soda at my house! :-)