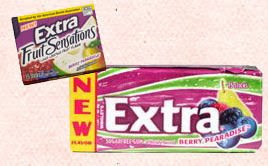 he other day at Wal-Mart, I saw some new gum flavors. I got some Extra Fruit Sensations Berry Pearadise gum & some Mentos Gum. I didn't really pay attention to the flavors, I just knew that it was new and fruity. When we got home, Evan tried the Mentos (Red Fruit Lime) and I tried the Extra.

As I peeled the plastic wrapping off of the Extra Fruit Sensations, I got a whiff of something that instantly made me think of ass, only fruity. Like if I got drunk on Sloe Gin & shat myself, that's what it would smell like.

But since I'd bought it, I was going to try it.

I can say that it tastes much better than I had expected after the displeasing aroma. But that's not saying much...

The Mentos gum does not smell offensive, but the combination of red berries & lime leaves a lot to be desired.

I think Orbit's Mint Mojito (I think it's Orbit) is much better.