I Love Jon and Kate Plus 8! 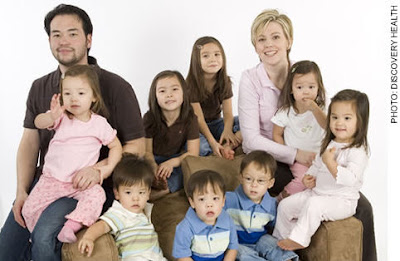 just recently started watching the show a few weeks ago. I think it's because there was nothing else on. I fell in love with it immediately.

The Gosselins are a couple who were having trouble conceiving, so they tried fertility drugs. They had twin girls named Cara and Madelyn. After 3 years or so, they decided to try for just one more. They ended up with 6! Alexis, Aaden, Collin, Leah, Hannah and Joel.

Kate is a bit controlling and OCD (She admits it). Jon has a very wry sense of humor (you know I appreciate that!)

Jon & Kate are funny together and separately.

All of the children are adorable. I cannot imagine having even one more child, let alone 7! *faint*

Honestly, I think I was extremely lucky to get the child that I did. I have learned so much from Evan. He is such a role model for me. He is much more compassionate & empathetic than I will ever be.

Pre MS diagnosis, I was afraid that if I had another child, it would be the total opposite of Evan. I might have a good pregnancy, but the child would be the Spawn of Satan, LOL.

Post MS diagnosis, I just felt that having another child would be selfish on my part.

I think I'm a decent mother to my one child. Kate deserves some type of "Mother of the Decade" award for the job she does with her children!

On Valentine's Day, she made heart shaped food all day. She puts little love notes in Cara & Maddy's lunch boxes. She recognizes and appreciates that all of her children have different personalities and respects and loves that about them.

She's the type of mother I would aspire to be if I had any aspirations. :-)

You should definitely check out their show on TLC, Mondays at 9pm EST. (It's also shown at a lot of other times. They had an all day marathon on Mother's Day.)