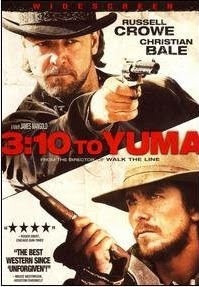 Starring: Christian Bale, Russell Crowe, Ben Foster
Director: James Mangold
Genre: Drama Action Crime Western
Plot from IMDb: A small-time rancher agrees to hold a captured outlaw who's awaiting a train to go to court in Yuma. A battle of wills ensues as the outlaw tries to psych out the rancher.
Rating (out of 5 hearts): ♥♥♥♥♥
Should you see it? Absolutely!
My Comments: If you haven't seen this movie yet, go buy it. I'll admit to being a Russell Crowe fan, so I'll watch almost anything he's in. I watch Christian Bale because after seeing The Machinist, I watch whatever he's in because I think he's either very dedicated or insane. Maybe I'm trying to figure out which?

The movie starts with Dan Evans (Bale) having his barn burned down because he's behind on the payments for his land and the owner of the land wants to sell that particular land to the railroad company. Then we see Ben Wade (Crowe) and his gang of bandits robbing a stagecoach.

Evans & his two sons see what happens with the stagecoach, but Wade sees them too and takes their horses so they can't get to town too quickly to report the crime. Evans ends up agreeing to accompany Wade, along with a posse of lawmen, to the 3:10 train in another town that will take Wade to Yuma Prison. He does this for $200.

Along the way, we learn that Wade is one of the worst of criminals. He's robbed 21 stagecoaches and killed hundreds of people. He's a wanted man. Evans has lost full use of his leg in "the war" (I'm assuming Civil? He said he fought for the North).

There are great gun fights, but there's a really good story here. Both characters are well developed. There are reasons why they do what they do.

When I started watching the movie, I thought I'd fall asleep. By the end, I was sitting up straight wondering how it was all going to end.

I'll be adding this to my DVD collection ASAP. :-)