ast week, I borrowed Valkyrie from the Library. 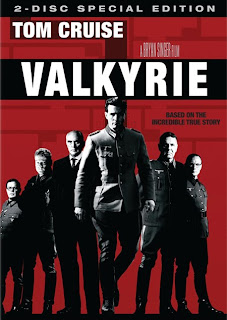 Have I mentioned that the last video rental place around here closed down this month? Not that I rent movies. I usually try to buy a movie if I think I'll like it because it's cheaper in the end, especially if I'm going to watch it 500 times.

I had seen the "special" on the History Channel about the real Colonel Claus von Stauffenberg & the plot to kill Hitler. (Did you know various groups or individuals had tried to kill Hitler 40 times or some shit?) I'm sure the special was on about the time that the movie was released in theaters, so after seeing the special, I wanted to see the film.

Luckily I am a) forgetful and 2) patient when it suits me. So if I want to see something and forget about it, it will eventually come on TV and I'll get to see it for free. :-)

The movie was awesome. The special effects were great, IMO. The only problem I had for about 5 minutes, before I really got into the film, was that Tom Cruise was speaking with an American accent and everyone else was British.

‘The only thing necessary for the triumph of evil is for good men to do nothing.’I mean, I saw "Far and Away" way back when so I know that accents aren't Cruise's strong suit (he should leave the accents to Brad Pitt) but really, he couldn't even fake a British accent? Isn't he friends with David Beckham (who has a very low class British accent, IMHO)? He couldn't pretend to be Becks so he'd fit in with the rest of the cast?

It doesn't matter in the end, because once the story really gets moving, the last thing on your mind is Cruise's accent.

Even though I knew the plot was going to fail, I wanted to know why it failed.

I blame the pussies General Friedrich Olbricht (he didn't put the plan into effect until it was too late) and General Friedrich Fromm who, like most politicians, was only looking out for himself and not "the people" that he was supposed to be representing.

It's really strange that such a small man (Hitler) can make so many people scared to death of him. Even when there are a few who try to stand up and do the right thing, there are others who are so scared that they'll continue to do the wrong thing.

Another thing I found interesting was how much Cruise looked like the real von Stauffenberg. 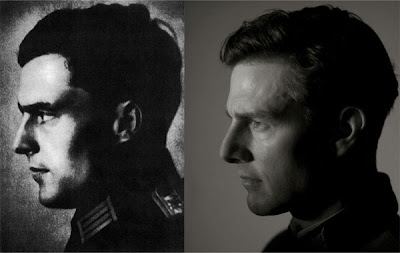 I don't feel like I need to tell you the whole plot of the movie. You know this already. (Maybe not this specific plot, but you know that there were attempts to kill Hitler.)

Growing up, I didn't hear anything about all the plots to kill Hitler. So, like a lot of Americans, I assumed that most Germans were racists who didn't see anything wrong with the genocide of the Jews.

I will say that I don't think this is a movie you'd want to watch over and over for years to come, so I'd suggest rental or borrow it from your library versus buying it. But it is worth the $5 or whatever it costs to rent a movie these days.