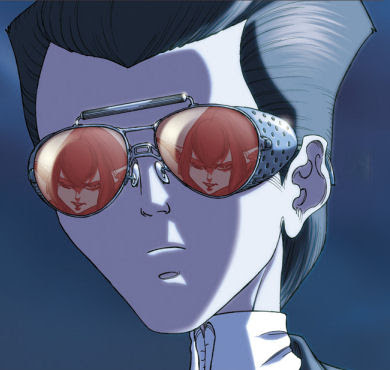 Artemis Fowl is, in the first book, a 12 year old criminal mastermind. He comes from a long line of criminals. His father, Artemis Fowl I, had tried to go legit about 2 years prior to when the first book is taking place. He had gone missing in Russia and Artemis' mother, Angeline, goes insane with grief.

This leaves Artemis with 1) the desire/need to keep building the family fortune and 2) plenty of unsupervised time to indulge in his criminal undertakings.

Artemis is taken care of by his bodyguard/friend Butler.

In the first book, he becomes obsessed with Fairies, and their alleged gold. He has Butler hunt down a disgraced/disowned fairy and gets her drunk (alcohol is toxic to fairies) and takes pictures of "The Fairy Bible" which tells how they get their magic, how they heal, and that they have a huge stockpile of gold in case one of the fairies is taken hostage.

So Artemis kidnaps Holly Short, the first female officer in the LEPrecon Police Force and negotiates her return in exchange for 1 ton of gold.

During the hostage negotiations, the Fairies stop time around Fowl Manor and threaten to kill everything living within Fowl Manor with the use of a Bio Bomb (or something, I don't remember what it's called.)

Artemis is sure that he can break the supposedly unbreakable Time Lock and get out of Fowl Manor before the LEP can kill him with the Bio Bomb.

He does, obviously, or there wouldn't be a second book.

In the second book, The Arctic Incident, Artemis receives a ransom request for his father who has been presumed dead by everyone except Artemis. He resolves to get his father back without losing any of his hard won money.

At the same time that Artemis asks for help from Holly Short (the fairy he kidnapped in the first book) in getting his father back, the LEP is under attack by the fairy who was embarrassed and demoted to Private in the first book.

So he, Captain Short, Butler (the bodyguard) and Commander Root (Holly's superior in the LEP) are the only ones who can save the LEP from attack before they go get Artemis Fowl I.

I like the way that Colfer weaves lore into the stories by taking words we all know (like leprechaun) and using it as Lower Earth People recon Force (LEPrecon). I like the fact that the different creatures that all live under the earth to avoid detection by humans (known as Mud People in the books).

The books are quick reads. If I didn't have to do things like check my e-mail or vacuum I could probably finish them in a couple of hours each. They are definitely page turners.

Even if they are written for kids.