Did the laundry today 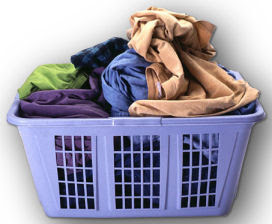 ven though I had all week to do it.

My knees were hurting...

Anyway, Evan and I were in the car people watching while the clothes washed and dried and a redneck pulled up right beside us and parked in the handicapped space.

Me - He doesn't look handicapped to me.
Evan - Why is he staring at us?
Me - I don't know. I think he's going dumpster diving.

Dude gets out of the car. He's wearing all camo.

He goes to the dumpster and looks inside.

Evan - He's starting at you now.
Me - Because he wants to have sex with me too, dur.

Dude gets in car and Evan & I continue talking about him.

My alarm goes off, letting us know that it's time to put the clothes in the dryer.

So we get out of the car. Evan smiles at dude. Dude does not respond.

Evan - I smiled at him and he didn't smile back.
Me - Whatever.

So after we put the crap in the dryer, we go back out to the car.

Evan - I guess he can't read since he parked in the handicapped space.
Me - Well, there are no words there, just the symbol.
Evan - Maybe he can't read symbols.

Me - Maybe that's his only mode of communication.
Evan - LOL.

So after the alarm goes off again, we go in to fold the clothes.

After we fold the clothes, we go back to the car.

Redneck is talking on the phone

Then I got home and visited my favorite blogs. I found a quiz that tells you your greatest of the 7 deadly sins.

Labels: Life
Email ThisBlogThis!Share to TwitterShare to FacebookShare to Pinterest