Oh no she didn't!

od even answers prayers that I haven't expressed through praying!

I was just wishing that I had something about which to blog. I had decided that I was going to resort to the "Monday Memeage" of this blog's past. So I went to The Daily Meme and saw a few new memes that I had never tried.

The first blog that I decided to try (which shall remain nameless because I'm really not trying to start some drama) had the following graphic/javascript on the page. 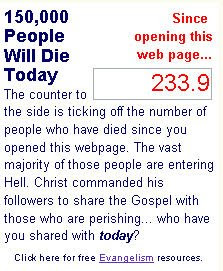 The part that really caught my eye was "The vast majority of these people will go to hell."

First, I knew instantly that I didn't want a link to my blog on that page. Secondly, I already know I'm going to hell, I don't need anyone to tell me.

Maybe one of the reasons I'll be going to hell (I mean, besides the pre-marital sex that I have enjoyed immensely and can't honestly ask for forgiveness for it when I know I'll do it again at the first opportunity) is that I don't try to "Witness" to any and every person that I meet either in person or on my blog.

Confusing enough? I've been practically narcoleptic during the day and, as a result, sleepless at night. So I'm trying to beat those damned War Wasps on Metroid Prime. Which doesn't help. Not even letting Hugh Laurie's voice lull me to sleep when I put my House DVD's in on repeat. :-(

Whatever, back to the subject.

That freaking song "Oh No You Didn't" has been running through my head for the past 48 hours. I have no idea why, but it won't get out of there. It's like when the Fruit of the Loom Guys had that "Blue" commercial. But at least I genuinely liked that song, LOL. The only good thing about it is that it got "When I grow up" by PCD out of my head...

NOW back to the subject...

If I can remember what it was...

Oh! I was going to say that the good thing about the internet is that you can leave the page if you see something you don't like. You aren't forced to stay and read it.

Which is what some people who land on this page need to realize. But I won't get into that, until the next time I'm feeling bitchy. :-)

Labels: Random, Religion and Spirituality
Email ThisBlogThis!Share to TwitterShare to FacebookShare to Pinterest