s you know, I was pissed off at 10:20 am. Then I called MD at 10:30 to see if she'd gotten a call from my doctor because I had some blood tests run last week and the results were supposed to be in Tuesday. She hadn't, but she told me she was going to grill later in the day (Noon) so if I wanted to grill something, bring it over.

So Evan and I went to the store & bought a pork butt, kielbasa sausage, a whole chicken & some hot dogs. 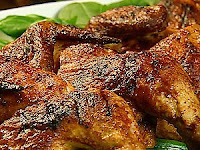 At the store, I told Evan to ask the butcher to cut the butt & the chicken in half while I looked to see if they had anything else I wanted.

That butcher was precious. (Our nice "southern" way of saying that someone is a plum idjit.)

Anyway, after I got to MD's house, I realized that the butt halves would take for freaking ever so I cut one of them in half. I seasoned one butt & one chicken half with BBQ rub, I seasoned the other halves with regular salt, pepper & garlic.

MD had some country pork ribs & hamburgers. She decided to try turkey burgers too.

Evan had been wanting to try liver. Since I think it's disgusting, I would not buy any liver of any type. But there were chicken livers & gizzards in the chicken bag (along with a neck) so I grilled them up for him. He didn't like them, LOL. 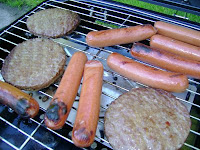 Yesterday was a nice day. I think it was only about 85 degrees and we had a nice breeze. However, since 1) I make her nervous when I stand by the grill because she thinks I'll fall into it and 2) I had taken a Benadryl (for allergies) and a xanax (to deal with MD) before we went over there, I really was feeling a little drunk, she & I took turns flipping the crap on the grill.

It's odd that after I had been wanting pork butt for a looooooong time, the only thing I ended up eating was the Kielbasa on a bun.

By the time we left at 5:30, my entire back felt like one big muscle cramp. I was hot as hell, and the xanax was definitely wearing off.

When I got home, however, I decided to clean the blinds that cover the back door. I get in moods when something finally bugs me so much that I just have to clean it no matter how tired or in pain I am. So I took them all down, put them in the sink with some Mr. Clean with Febreze & washed them.

You know how after years of living in a place, stuff gets dingy with age or whatever. That new WHITE refrigerator is inspiring me to make everything as white as it used to be. The landlord had offered to paint, but I have bookshelves, pictures & so much crap to move for that to be able to happen, it would be like moving. Screw that.

I have been using ammonia for some things & Mr. Clean for other things. It smells so good.

Anyway, after Evan had put all the blinds back up, he went to use the bathroom.

BTW, MD has a freaking Dyson. I keep trying to get her to get the one with the ball, so she can go around corners & whatnot. She will NOT budge on buying it. She also has 4 OTHER VACUUMS Yes. She has one for each area of her house so that she doesn't have to move them... The Dyson is only for the family room, apparently. Anyway, after months of me complaining that my vacuum doesn't suck, she gave me a new one. Old to her, but since she's had it, she hasn't even put an inch of stuff in the vacuum bag. Both of the filters on it look unused. She makes me so sick, LOL.

But I'm taking the day off. I'll let you know how my new vacuum cleaner works some other day. I've done enough cleaning for the year!!!!!!!!!!

Now, I'm not exactly happy (they still have to funk up my house when they come in to give me the new cabinets, kitchen sink & stove) but I'm much less pissed that I have been for the past 2 weeks.