very summer, I say that I'm going to get rid of ALL the crap that we don't need anymore.

We started yesterday with Evan's room. He was thrilled. ;-) He has clothes that he hasn't worn since 2nd grade or something. But rather than throw them away, he rips them up and makes costumes for himself (Ninja or whatever). So we started throwing away size 12 shirts, LOL. He wasn't happy.

I know I should have bundled up all the clothes that are too small for him but still good enough to give away, but *sigh* I don't know if I have the energy to do that. Plus I have to wash them first. 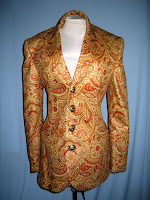 Yes, I still have clothes I haven't worn since HS, but who cares? My sofa patterned suit jacket might come back in style. And my neon green Chuck Taylor knockoffs too...

30 minutes a day until I have more room to buy more shit and fill up all the black holes (closets that are never opened) in the house again.

This song, Lookin Boy has been going through my head all weekend.

Probably from the So You Think you can Dance auditions. And before I forget, have you seen "Jesse James is a dead man" on Spike TV? Watch it. I don't know why he's trying to kill himself, but it will be entertaining until he does...

We were supposed to go to his school for the free lunch program they have every summer. We haven't gone since he was in kindergarten & went there before we went to the pool. But, of course, I couldn't get to sleep until 9ish this morning.

Last thing I knew, The Boy was still awake too.

Thanks to Daddy Papersurfer, we've both become addicted to Spymaster.

Now I need to take a nap.

And wait for The Boy to wake up so we can do another 30 minutes on his room.

OH! Did you see what Sacha Baron Cohen did to Eminem last night at the VMAs? LMFAO! I started seeing something about it on Twitter. Found a few videos that hadn't yet been taken down due to copyright, you might be able to find one that hasn't too, if you hurry. LOL.