ell, I finally broke down and bought Batman: The Dark Knight because they don't seem to have it at the lieberry and the price isn't going down at Wal-Mart. Lately, it seems like they sell the movies at full price for a couple of weeks, then it goes down to $13.

I got tired of waiting, didn't want to pay to rent it when I knew I was going to buy it, so I paid $19.96. It hurt me to do that. Because Circuit City was selling it for $13 ONCE and, of course, Wal-Mart had no copies and wouldn't issue a rain check. 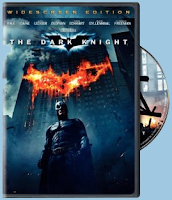 The Dark Knight
Starring: Christian Bale, Heath Ledger, Morgan Freeman, Gary Oldman
Director: Christopher Nolan
Genre: Action Crime Thriller
Plot:from IMDb: Batman, Gordon and Harvey Dent are forced to deal with the chaos unleashed by an anarchist mastermind known only as the Joker, as it drives each of them to their limits.
Should you see it? Hell to the YES!!!
Rating (out of 5 hearts): ♥♥♥♥♥♥ (Yes, I know that's 6 hearts. I can count.)
My Comments: I really didn't have any expectations for this movie. I usually take a long time to see a movie if everyone and their brother has seen it and raved about it. All the hype makes me think the movie is going to be wonderful and I end up being disappointed. It took me until this summer to start watching Lost and now I love it.

This movie? This movie right here? This is THE SHIZNIT, BEEYOTCH!

"This movie? This movie right here? This is THE SHIZNIT, BEEYOTCH!"Heath Ledger was awesome as The Joker. I have always been partial to the first Batman movie with Michael Keaton, Jack Nicholson and the Prince Soundtrack :-). But Heath Ledger took this role OVER. O.V.E.R. Now I understand why people (the general public) were so sad about his death. Because it would have been awesome if we could have had another Batman vs. The Joker movie.

But maybe it's best that we can't. We will not be disappointed with a sub-par script or Ledger doing an impersonation of himself playing The Joker, nodamene?

What surprised me was how funny The Joker was in this. The fact that I really can't remember if Nicholson was this funny as The Joker is saying a lot (to me).

If you've already seen it, see it again. If you haven't seen it, buy it. It was awesome.

I had planned to go to sleep during the movie, but Evan is the one who got sleepy and went to bed. I stayed up for the whole movie. It felt a lot longer than 152 minutes, but not in a bad way. Then I came to write a review while it's still fresh on my mind.

It seemed like a lot of familiar faces were in the movie like Michael Jai White (Spawn), Anthony Michael Hall, Eric Roberts and Aaron Eckhart as Two Face. Don't even get me started on the special effects for that. So much creepier than Tommy Lee Jones' portrayal.