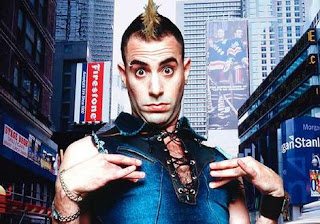 m, stuff happens. I forget to blog about it. So here's what's been happening over the weekend.

Evan pulled a radio off the bathroom shelf (about 6 feet up) onto his face. Accidentally. He was trying to kill a gnat. He's fine. But the noise was loud. It's probably broken (the radio) because at least one of the speakers is not connected to the radio. It's a "boom box". I don't know if it fell in the toilet or what.

I finished Audition. It took almost 2 weeks. I mean, it was good. And probably a well needed former current events/history lesson, but it was so much WORK. Now I'm reading "Cross Country" by James Patterson & loving it.

My back hurts. I'm about to take some pain pills and lay on the heating pad.

There's a real live town called Llanfairpwllgwyngyllgogerychwyrndrobwllllantysiliogogogoch. It's in Wales. In England. Can you believe that ish? I found out from Daddy Papersurfer's tweet. I thought he was joking.

Watch the trailer for Bruno (Sacha Baron Cohen). I think I'll like it more than Borat. I can't wait for it to come out on DVD.

Have you ever heard of Bully Beatdown? It's on MTV. A mixed martial artist gets other MMA fighters to beat up bullies for $10,000. If they make it 2 rounds without quitting, passing out, or having the referee stop the fight. It's funny.

I stopped recording Celebrity Apprentice when I realized that it was going to be 2 hours every single episode. So I missed what Dennis Rodman did/said. Is he still there?

I watched The Mighty Boosh on AdultSwim yesterday. I think I'll watch it again next Sunday. It's a British show.

It's odd. But just odd enough to keep me interested, LOL.

I can't remember what else.