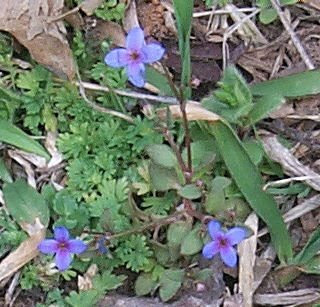 feel like today should be Wednesday. Maybe because I was up so early yesterday.

In case you were wondering, I'm up to the Reagan Administration in Audition. This book seriously is a history lesson. I was surprised that Walters said, when speaking about First Lady Betty Ford, that if she were doing the interview today she would show the footage of an obviously intoxicated Mrs. Ford. She said that we are a "let it all hang out" society these days and maybe having shown the footage, it would have made Mrs. Ford get help sooner.

Well, IMO, people who are drug addicts/alcoholics don't really change unless or until they hit rock bottom. Didn't we have about 2 years with Britney Spears acting insane before her family stepped in? Maybe a First Lady would get help sooner, but I don't think that any of these young stars would care enough about their careers or the effect their actions have on society to really do anything just because a video popped up on TMZ.

My fingernails seem to have stopped growing. :-( 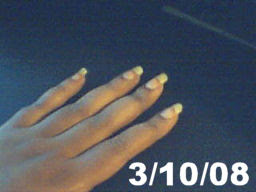 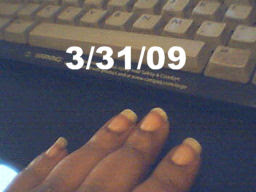 I cut them because they kept breaking and I don't like when one nail is short and all the other ones are long. I knew the short ones would never catch up with the long ones. But I'm getting sick of looking at my short fat fingers!

Tina Fey is hilarious on Twitter. She just doesn't do it enough. My favorite Tweet from her is "I don't even know why I bother to chew corn anymore." She's precious. :-) 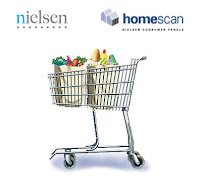 I got my Nielson Home Scanner. It's just like one of those scanners at the grocery store. You scan the shit you buy and then send it to Nielson and you earn points. I'll let you know how it goes.

I took the "DO NOT DISTURB" sign off of my door so that UPS would deliver it, but they didn't. They took it to my landlord. Which is fine, I guess. But he sat here talking for me for about 20 minutes about computers. That's why I don't like talking to people. You ask one question and they tell you everything.

I did find out that his home computer, that he built himself, has like 5GB of RAM.

To put it in perspective, I added about 512Mb of RAM to this computer. So I have 1.24Gb RAM. One (1) Gigabyte. He has 5 GB of RAM and I don't remember how much memory in total. I just know that when he told me, my jaw dropped.

I'm driving a Pinto and he's got a Ferrari, in other words.

I can't even imagine how fast his computer is. I just wishhhhhhhhhhhhh I could afford to put whatever I wanted on my computer and not slow it down.

I think that's all. I need more cigars.