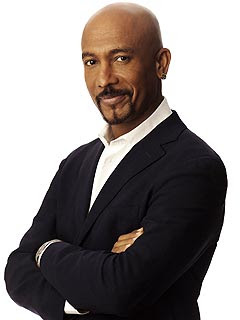 ast week Tyler Perry was on Oprah, so I watched the Hated Woman's Show for that reason. I found out that Montel Williams was going to be on today talking about Multiple Sclerosis, so I set my DVR to record it.

I'm glad MD watched it. I think because I don't complain constantly (IRL) about how I feel, that she thinks I'm faking how bad I feel. It was nice to have Montel talk about the pain he has (his pain sounds much worse than how I feel every day) and people thinking that since he's still walking, he's doing fine.

If you tell someone that you have cancer, they understand immediately that you might not feel like going out to eat, or going shopping, or going to the movies.

You tell someone that you have Multiple Sclerosis and 1) they don't really understand what it is and 2) you look fine so they think you must be fine.

Only Evan (poor Evan) and the people who read my blog know how shitty I feel a lot of the time. People I see when I go out have no idea, because I don't like to complain out loud. I'm not a "woe is me" kind of person, never have been.

I made Evan watch with me. He didn't want to. I think he was afraid of hearing what the future of MS might be for me. I said "Montel has had it for 10 years, and he's still walking. I'm sure it will be fine. I don't care if you don't want to watch it. You are. Sit down."

Halfway through, his Favorite Cousin came and asked if he could go outside.

Me - When Oprah is over.
Evan - Not until Oprah is over.
FC - *incredulous voice* You're watching Oprah?
Me - LMFAO!
Evan - *sounding very depressed and put upon* Yes. Do you want to watch it with us?
FC - No, I don't want to watch Oprah!
Evan - I'll see you when it's over.

Anyway, I paused it a few times to say "I've experienced that too." and I told Evan that when he was younger and I used to have to drop him off a daycare that I would pray that there was some way I could not work but still be able to pay my bills.

I got Multiple Sclerosis. Not the way I would have wanted my prayer answered, but it was answered. I don't think I'd ever told him that before. 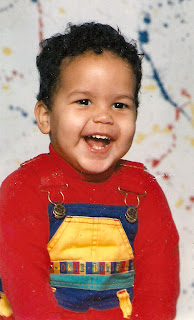 He was so cute and cuddly and smart and I hated having to drop him off with someone else to raise every day. I wanted to raise him with my values and beliefs.

Anyway, my diagnosis was a relief because for 2 years I thought I was going crazy. I'd get strange symptoms that weren't connected to anything else I was feeling. The doctor would tell me one thing and then something else would happen and he'd say "Well maybe it's this..."

That's why I like House, MD. I think it shows that doctors really don't know everything. They are just human like everyone else. They don't always have the answer.

I'm getting off track here, but while I'm thinking about it, here are a couple of pictures for Relax Max to use next time he writes about Hugh Laurie. 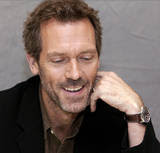 I have the originals, so if you want them to be bigger, just let me know. :-)

Now I don't remember what I was saying about Multiple Sclerosis.