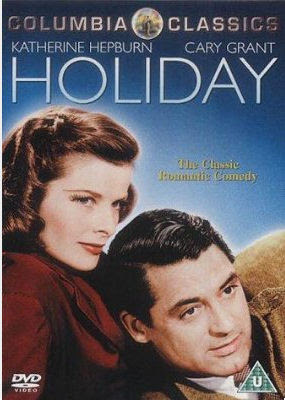 happened to wake up early this morning and TCM was showing Holiday with Cary Grant and Katherine Hepburn. I missed the first 10 minutes, but it really didn't matter. Following is a quick review of the movie

Director: George Cukor
Genre: Romantic Comedy
Plot: (according to IMDb) "Free-thinking Johnny Case finds himself betrothed to a millionaire's daughter. When her family, with the exception of black-sheep Linda and drunken Ned, want Johnny to settle down to big business, he rebels, wishing instead to spend the early years of his life on "holiday." With the help of his friends Nick and Susan Potter, he makes up his mind as to which is the better course, and the better mate."
Should you see it? YES!
Rating (out of 5 hearts): ♥♥♥♥
My Comments: This is one of those movies you can't see with any judgements. It's pretty clear from the beginning of the movie that Johnny (Grant) belongs with Linda (Hepburn) instead of Julia Seton.

The Setons are the stereotypical wealthy family. They turn up their noses at anyone who does manual labor or doesn't come from the "right kind" of family. Johnny grew up with blue collar parents and worked his way through Harvard business school.

So when Johnny is 30, he has made his first million dollars and decides that he's going to quit his job and enjoy his life while he's still young. He just hasn't told his fiancée Julia.

When Linda meets Johnny, she finds a kindred soul and admires his plan to a enjoy a life spent pursuing happiness instead of money.

I think you can guess what happens. And when it did, it made me smile.

I am the woman lacking most of the romantic bones in the typical female body.

Definitely check out this movie if you see it on your schedule. It will leave you feeling good about life. :-)