got a call from MD asking me to get her a phone like mine if Evan and I went to Wal-Mart this weekend. (As if we ever don't go to Wal-Mart on the weekend...)

Waited for Evan to get home & drove to the doctor's office. 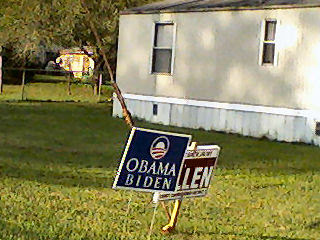 This is a red state, in case you didn't know. So every time I see an Obama sign I'm surprised. These rednecks (the ones I've spoken to, anyway) think he's a Muslim. So I took pictures of the Trailer Park Rednecks who support Obama, LOL.

Got to the Dr's Office.

Me - Go ask them if they have the refills ready for Angelika Lastname, even though it looks like they're closed (no cars in the parking lot & the blinds were closed).

So Evan went up and tried to open the door, he turned around to look at me & one of the nurses opened up the door.

Nurse - I was waiting for you. Here you go.

So I got 2 months of the pain medication (not narcotic, obviously). 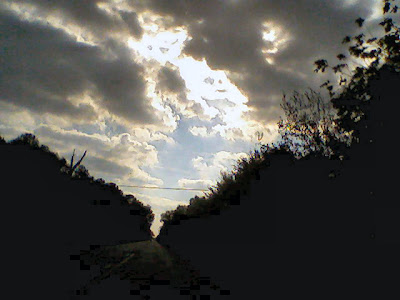 Here's the view on the way to the pharmacy. It's a very spooky street to drive on when it's dark. Today was sunny, but the clouds, combined with the claustrophobia inducing trees make it look darker than it really was.

Went to the pharmacy and there were 3 or 4 cars in the drive thru lane, so I went in. Found out that they're giving free Flu Shots on Tuesday. So I'll be getting a Flu Shot without having to pay my ginormous $1 copay, LOL.

Went to Wal-Mart and got the phone.

Here are some of the things I see on the way to Wal-Mart. 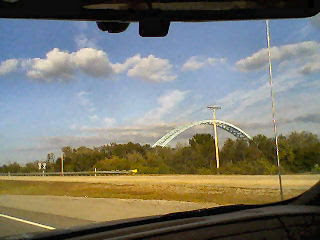 First, the Blue Bridge. Since Evan was little, he's wanted to know what's on the other side of that bridge. MD drove across it once so that he could see what was there (nothing). But every time I drive on it I think about my former Redneck BF who used to JUMP OFF THE EFFING BRIDGE into the Tennessee River. I'm pretty sure he had/still has a death wish. In case you're keeping track, this is the same genius who stood up at his father's funeral and said, rather loudly, "He's going to Hell!" 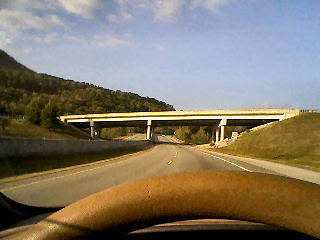 Next is the bridge that connects the Blue Bridge to civilization. It's relatively new. I think it's been here for about 5 years. The other one has been here as long as I've been living here (20 years).

Finally, an Obama sign that was in MD's neighborhood. I don't think any white people live on that block. I actually think that MD is related to everyone who owns a house on that block. I'm not even kidding. I was surprised by the person that had that sign. They're like 20something drug dealers (allegedly). Do suspected drug dealers vote? Or do they just have it up because Obama is black? (I think that's why, honestly.)

When we first moved here, 20 years ago, the segregation lines were still drawn. Although MD had enough money to build her house wherever she wanted, she chose to build close to all her relatives. Her house still doesn't fit on that block. Every other house has either been there since I've been a child, or it's a modular home. I'd take a picture of it, but she'd be pissed. 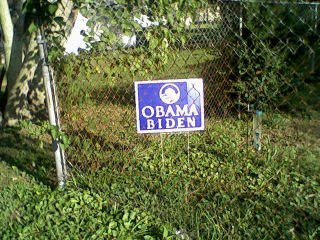 I think the town is still segregated. The black people still build on one side and the white people still build on the other. I don't think it will change until Evan is my age and everyone is Racially Ambiguous. I think there's ONE black kid in Evan's class (I mean the entire 7th grade). All the other ones that aren't white are mixed. Which is why I can't tell him from any of the other boys if his back is turned.

They all look alike.