o I'm watching some of the crap I recorded Sunday night, and the first 12 minutes of "The Unit" is whatever came on before it.

Which means that I didn't get the last 15 minutes of the show I wanted to tape.

I didn't know until hours after it had recorded.

Now I have to watch it online.

I hate it when the networks forget about those of us with DVR and delay our shows for some shit that nobody watches.

So now I have to set "The Unit" to record for 15 minutes after it's supposed to go off, just in case.

I'm used to doing this for Sci-Fi network shows. "Eureka" always starts up to 15 minutes late. I'm used to setting things on MTV or VH1 to go 5 minutes over because those shows never start on time either and the crap gets cut off right before we find out who gets kicked off or whatever.

At least I was awake & watching when Bush had his speech, so I knew to set things to record over. I don't even know what was on tonight.

I went ahead and added all the channels that will be active on 10/16 so that I can see if the DVR will record the shows I have programmed, or if I have to change them. 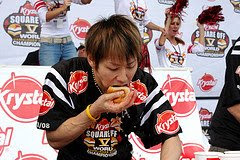 I happened to see the Krystal Square Off V Competitive Eating Competition that took place in Chattanooga. Kobayashi (the Japanese dude who used to always win) didn't win. He came in 3rd place. The man who won last year didn't even eat as many Krystal burgers as last year.

For you Yankees, Krystal is the same thing, IMO, as White Castle. For the non-Americans...I don't know what to tell you. Look it up. 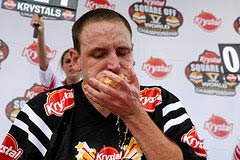 Anyway, Kobayashi couldn't compete last year because he had some kind of jaw injury. I guess he hasn't gotten his mojo back. But it looks like he doesn't even chew anyway, so I don't get it.

Every time I hear the name "Kobayashi" I think about Kayser Soze in "The Usual Suspects". Kevin Spacey kicked bootie in that movie.