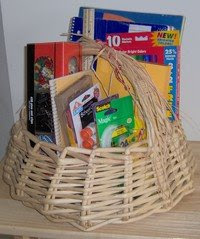 First I went to the bank. I saw an aunt of a friend of mine and what I assumed to be one of her great nieces and that girl's child. Yes. I'm used to seeing 16 year olds with babies.

Every other girl at Wal-Mart was pregnant today. And EVERYBODY in my county was shopping today (Tax-free for school supplies & clothes 8/1 - 8/3).

Anyway, as we were about to leave someone said:

Friend - Ma'am, I'm going to need to see your driver's license for that thing (I was in an electric cart)
Me - Hi! *hug* I haven't seen you in forever, blah blah, small talk.
She - So I guess you're here school shopping.
Me - Yep.
She - I have to get DD#4 some new shoes.
Me - I have to get Evan some too. But not this month. Car insurance & tags. He'll have to wear his old ones until MD sees them and feels sorry for him, LOL. Oh, BTW, I saw your Aunt today.
She - Where?
Me - At the bank. I don't think she recognized me because she looked right through me. She was with that retarded girl. I didn't know that girl had had a baby!
She - What retarded girl?
Me - I don't remember her name.
She - *Naming off a list of names*
Me - Yeah! Jane (not her real name)!
She - Jane doesn't have a baby. That was my daughter!
Me - No, she had short brown hair. So did the little kid, about 3 years old?
She - Yes, that was Peach with Apple's (oldest daughter) baby! You called my baby retarded. *fake crying*
Me - Well I don't know if Jane was literally retarded, but she was very stupid. I couldn't believe that someone had slept with her. Anyway, OMG! I can't believe that Peach is that tall! She used to have blonde hair too!
She - Yeah, she's big now. Bigger than me. I have to shop in the Women's department for her. She wears a size 10 shoe! Pear is still skinny, it's easy to shop for her.
*more small talk*
Me - Well, I have to go before my frozen crap melts.

If we hadn't been such good friends she really would have been offended when I mistook her daughter for the "mentally challenged" cousin.

*hanging my head in shame*

In my defense, I haven't seen her since her mom died of cancer. I used to go over there when her mom was alive because when I was dating friend's brother, her mother & father (both of them are gone now) were very good to me & Evan. I had Thanksgiving with them a few years in a row. I miss PawPaw's cooking. :-( I used to tell him that his cooking was so good, I could mistake it for a black woman's cooking. He took that as a huge compliment, LOL.

They are the most redneck family I've ever known.

Which is why I stopped hanging around so much once Evan got older.

After Peach showed Evan her cooch (when they were 6), I figured it was time to move on....