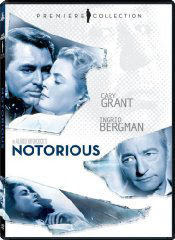 esterday was Ingrid Bergman day on TCM. I have 3 more movies to watch, but I started with Notorious starring Bergman and Cary Grant & directed by Alfred Hitchcock.

Grant played TR Devlin an Agent (they never specified what agency it was) for the US. His job was to hire Alicia Huberman (Bergman) to do something to help catch Nazis working against America. They chose her because, in the beginning of the movie, her father was put in prison for being a Nazi Agent/Treason and they knew that she was totally against his illegal activities and that she loved America because they had bugged her apartment.

So anyway, Devlin shows up at Alicia's going away party after her father is put into prison. She is leaving Miami because paparazzi (they didn't call it that in the movie) was constantly asking her questions about her father and did she know and why didn't she testify at his trial, etc.

After the party, Alicia is wasted and asks Devlin if he wants to go for a ride. She insists on driving. They get pulled over, but Devlin shows the officer his ID and says that he will take care of Alicia. They didn't get a ticket, but Alicia is suspicious of why and freaks out on Devlin because she knows that he's some kind of Agent.

He tells her that America needs her to help catch the rest of her father's cohorts. Neither of them know exactly what she needs to do yet, but she agrees.

They go to Cuba (I think) and fall in love *rolling eyes* while waiting for Devlin to get a call from his superior.

Finally, Devlin finds out that Alicia is supposed to seduce or ingratiate herself with a man named Alexander Sebastian. In the past, Sebastian had been in love with Alicia and they'd even been engaged. Of course, her previous relationship with him will make it easier for her to find out information about him and his illegal dealings.

Sebastian is suspicious of Alicia's relationship with Devlin. He is sure that Devlin is in love with her and that she might possibly be in love with him too. The only way he will continue to see her is if she marries Sebastian ASAP.

Alicia goes to speak to Devlin and his superior and tells them about Sebastian's conditions. She's looking for Devlin to say that she absolutely cannot marry Sebastian, but he doesn't. He's angry with her because he believed that she was "innocent" and never having told him about her previous relationship with Sebastian.

So she marries Sebastian and starts snooping. The only place she cannot get into in the house is the wine cellar. So she has Sebastian throw a party & invite Devlin under the premise that if Devlin sees her happy with her husband, he'll stop harassing her. 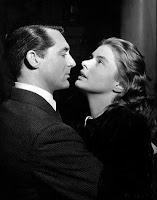 She steals the key for the wine cellar from her husband's key ring & she and Devlin go in to the wine cellar and find a bottle that is full of some kind of sand. Devlin accidentally knocked the bottle over so they try to clean it up as best they can. Before they can get back to the party, Sebastian is coming down the stairs so Devlin grabs Alicia and starts kissing her & whispers "Push me away!".

At the party, Sebastian is suspicious. He notices that his key for the wine cellar is gone. The next day, when his key is miraculously back on his key ring, he goes to the cellar and finds the remains of the broken bottle and knows that Alicia is an agent.

He and his mother hatch a plan to slowly poison Alicia to death so that 1) none of his criminal cohorts will find out that he's married to an American Agent and kill him and 2) so that there will be no suspicion of murder if she's sick for a long time before she dies.

The movie was all right. It had 3½ stars in the guide. The pace wasn't as slow as some of the other Hitchcock movies I've seen. There were no long sequences where nothing was happening other than the score. But, once again, Hitchcock just tied it all up in a bow too fast. They're building up to this dramatic conclusion and then the "The End" frame pops up. There was no pay off, IMO.

All the freaking "passionate kisses" got on my nerves too. It was like watching a Harlequin Romance book on screen.

Whatever, man. I'm really tired today. I want to be in bed right now. But I still have 3 more freaking movies to watch. :-(