I wonder if I remember what happened Sunday? 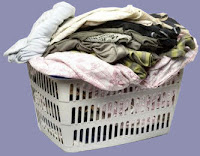 o Sunday MD had to help us do the laundry because Evan's arm is fractured, and I can't carry a basket and walk at the same time.

I had asked her to help us whenever it was that Evan fractured his hand and told her she could pick the date and time (I was hoping she'd just offer to do his laundry herself, but no such luck.) She decided on Sunday at 6pm.

I offered to drive so that I wouldn't have to get all the laundry detergent, fabric softener, bleach, etc out of my trunk and put it in her car. Plus she always has a big ass cooler and lots of shit she's bought and hasn't taken into her house yet. Sunday she had a 24 pack of Nestle Pure Life water that she had been saving for Evan to carry into her house. HA!

Anyway, she insisted on driving. (Because she thinks I'll have a seizure or something and kill us all. Nevermind the fact that I drive myself wherever I go and haven't had a crash yet....).

The problem it that is that other people invariably move too fast (so they're pulling me, increasing the likelihood that I will fall face first) or move too slow (which means that I'll bump into them or trip over my feet and bust my ass).

Whatever, we got in the laundromat with no problems.

She made calls on her miniscule cell phone while Evan & I sat on a bench and talked. It is so weird that he and I have so much fun at the laundromat just talking when both of us hate being there and it always puts me in a bad mood.

At one point, Evan snarted (sneezed and farted) and it cracked me up. It was so loud that MD heard it even though she was 100 feet away in her car.

So, for some reason, MD was in a singing mood. The entire time we were in the car, she was singing along with the music. No, she cannot sing. She's completely tone deaf, but we said nothing.

After we finished the laundry, I asked her to take me to Foodland so that I could get some bread and stuff. Normally when I go there, I either hold Evan's arm while I walk to the electric cart or he gets me a basket that I can use as a walker because they have a hill and a potholey parking lot (read: Potential Death Trap). That day, Evan took off because MD had asked him to throw some stuff away.

So, she thinks I'm her mother or something and holds me really close to her and really tight while she's singing some Bob Marley song.

Me - Could you lower your arm so that I'm not pressed up against your boobie?
She - *lowering arm & giggling* Ok *continuing to sing*

We were halfway up the hill and I couldn't take it her singing or her death grip on my arm anymore.

Me - Fine. That's fine, I can make it now! *Shuffling away as fast as I could*

She and Evan found it amusing.

So we got what we needed from da sto & went home. Made another laundry basket train to get the crap into the house & then she came in to watch Big Brother.

I'm sure I've forgotten something.

OH! She's always talking about wanting a "friend". So while we were at the laundromat I saw this 65 year old man & told MD I was going to set her up with him. Turns out she knew him. He was a lawyer or something.

She said he was too skinny anyway. *rolling eyes*

I told her that in my experience, really skinny men have huge penises.

Evan ran away at that point & she said "Angelika! You're awful!" in that mommy tone that she has.

I said this because I was just in "one of those moods" and I knew the old man could hear me.

I could see him turning around and gaping at me after I said that.

He should have been minding his own business!