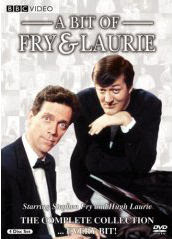 ollowing are 13 of my favorite quotes & clips from A Bit of Fry and Laurie.

1. Stephen Fry as a Barber - Which of sir's manifold hairs would he care to place in my professional care for the purposes of securing an encutment?

3. Stephen: You have a daughter, I believe?
Hugh: Yeah. Yeah, Henrietta.
Stephen: Did he, did he? I'm sorry to hear that.

4. I'm in love with Steffi Graff


5. Stephen Fry as a school Headmaster - I can't pretend to be much of a judge of poetry. I'm an English teacher, not a homosexual.

6. Hugh: Then I was Princess Anne's assistant for a while, but I chucked that in because it was obvious they were never going to make me Princess Anne, no matter how well I did the job. It was a question of who you were, rather than how well you did, you know, and I hate that.


8. Stephen: [General] What does it say on the name plate on my desk Jacobson?
Hugh: [Jacobson] "The Buck Stops At My Ass" sir.


10. Stephen: I suppose if I am honest I, erm, I use my penis as a sort of car substitute.


12. Stephen: Secret vices? I don't know. Rather too fond of chocolate Hob Nobs. My wife tells me I overdo the heroin. Otherwise, not really.

13. Stephen: Well, I was born Mary Patterson, but then I married and naturally took my husband's name, so now I'm Neil Patterson.