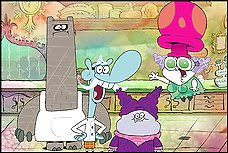 nother cartoon that Evan talked about incessantly until I decided to watch just to shut him up was Chowder on the Cartoon Network.

The show is pretty simple. Every character is named after a food. Chowder is an apprentice to the main chef, Mung Daal. Shnitzel also works for Mung. Shnitzel only ever says "Rada rada", but if you watch it long enough you get to learn what that particular "Rada" means, LOL. (How sad is it that I'm watching effing cartoons???)

Anyway, Chowder regularly gets into trouble and that's where the funny comes in. For example, this week Mung bought a pair of legs to stomp on his pizza crusts (or whatever) and Chowder cranked it up to 100 and broke the legs. So he was given the money to buy a new pair of legs and on his way to the store he forgot what he was doing. So he threw all of the money into a Wishing Well to remember why he was out. Then he didn't have the money to buy the new legs.

So he painted himself silver (with help from a gold painted statue) and stood on the street panhandling.

He got the money, but when he went back to the store, the owner was all out of the legs. Chowder saw the man who had bought the last pair of legs, snatched them from him & threw down the money and ran off.

I don't feel like getting into all the funny stuff that happened in that particular episode. Just know that it's not just for kids, IMO.

I tape the new episodes now. (Thursdays at 8 pm EST) Go watch a video from when Shnitzel quits because he isn't being appreciated for all the work he does! :-)