ecause I drank a HeadShot today. Last night I took a sleeping pill at 10. Got to sleep about midnight. But when I woke up at 7 am, I felt like I would have that "sleeping pill hangover" and be napping all day so I went ahead and drank it.

I have already vacuumed the living room, swept & mopped the kitchen floor, cleaned the oven, washed some dishes, and created a whole new "My Favorite EntreCard Blogs" widget.

Last night I rubbed Paula Deen's House Seasoning all over the pork butt that I didn't grill at MD's the other day. (Evan said, quote, "Let me smack that butt!" So he did, LOL.) I plan to bake it all day at 250 degrees. Which is why I cleaned the oven. Last time I baked some pork ribs, I spilled all kinds of grease in the oven and the next time Evan turned the oven on to broil a bagel, it set off the smoke alarm. (Yes, I have an ancient toaster oven that MD gave me about 10 years ago, but I have so much shit and so few plugs in the kitchen that I never use it.) 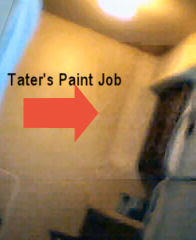 BTW, do you see the fantabulous paint job that Tater did? Does it look like it matches the paint AT ALL? He said he did 2 coats, but you can still see the drywall through it.

Let me go put the butt in the oven. BRB.

While I was putting the butt in the oven, I got irritated that 4 (maybe 5) days after they came just to paint the effing wall where the new cabinet is and ended up trying to fix my hall light & etc, I still had no lights in my kitchen. I got the bright idea some time last night to see if the fan over the oven worked. It didn't. I had decided that I was going to make Tater buy some new energy efficient light bulbs since the ones I had installed in the kitchen before he got in were barely 2 weeks old.

What was I saying? 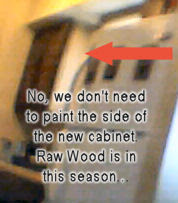 Oh, after the fan & light over the stove wouldn't work either, I decided that they had tripped a breaker in the fuse box. That's what it was. So once again I have lights on in the kitchen. And once again, I figured it out my damned self and not the fracking "handy men" who are supposed to know how to do this shit.

I really have done a lot to this apartment myself. Been here 17 years. I've put new "thingees" (I don't know what they're called) on the hallway railing because I knew that 1) some apartments don't even have a railing going up the stairs (!?!??!) and b) putting in a work order means that it will take approximately 6 mos before whatever landlord will finally get to it.

This new landlord is better than all the others, but he still hires people who do handyman work on the side instead of as a profession before he finally calls the professionals in. Which is why it takes so damned long to fix anything finally and completely and accurately.

I am a land owner!

One whole square inch. I was dropping Entrecards (oh yeah, that's something else I did this morning) and found this site that gives you one entire inch of land for FREE. No taxes. But you can't make any improvements. There goes my plans for a new flower garden... I found the site at Freebie Reporter. I love freebies.

I left a really long comment for CardioGirl. Really long. Like almost as long as this post long. But after I went back, I see that I'm not the only one. So I don't have to feel guilty about that, LOL.

I found a new blog today, because the owner of the blog (Jen) commented. It's called Happyfibrofamily. She has fibromyalgia and apparently wheat/gluten/sugar can exacerbate her symptoms. She has a post about dietary changes that were suggested to her by a Naturopathic Doctor for people with fibro or arthritis (I have that too, in case you didn't know.) One of the things was eating more red meat (YESSSSSSSSS!) and eating less sugar...like chocolate. I'll get right on that. (Did that seem believable?)

I use Splenda for everything but baking. But I still eat a lot of candy. I can't live without candy. Fuck that. I'll just put up with my swollen ankles & knees, LOL.

Did you see Will Smith on David Letterman this week? He was quite amusing.

Did I tell you that I bought some Invisible Glass Cleaner at my other home (Wal-Mart) last week?

I CANNOT get the damned computer screen clean. I notice it every time I post something on my blog. I've cleaned it 4 times already. It's irking me.

I have to clean the computer screen again with vinegar & water or something. Did I tell you that MD touched my car windshield and got greasy fingerprints all over it?

Right in the lower driver's side corner.

I should lift them and frame her for a crime. It would serve her right for trying to kill me.

I have to pee. Have I said that already?

1) I took the butt out of the oven a few minutes ago and made gravy from the drippings. The all day cooking makes the meat 'fall off the bone' tender. Love it!

2) Today I actually felt the "crash" from the HeadShot. I normally don't. But then normally when I drink one, I'm out of the house all day and still have to drive, so maybe I just don't notice it. It lasted, for me, from 7 am until 3 pm. Then I took a 2 hour nap. I will be up all night.

3) I can't remember what else I was going to say.

Pork Butt Samiches for a couple of days! WHOOOOOOOOOO HOOOOOOOOO!