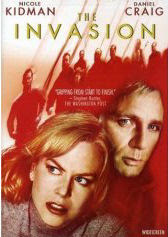 hen I went to Wal-Mart the last time, I made up my mind to only buy one movie. It was between "The Brave One" with Jodie Foster, "Braveheart" with Mel Gibson, "Shoot 'em Up" with Clive Owen and "Invasion" with Nicole Kidman.

I like Jodie Foster movies, for the most part. I wasn't particularly fond of "Nell" or the one she did with Mel Gibson...Maverick? I like Mel Gibson movies. I LOVED Braveheart. I have it on VHS. I just really wanted to see something different. Something that I'd never seen before.

I won't make you read through my entire thought process, but I settled on "Invasion". Obviously.

It was good. Once again, I was afraid I might not find it worth the $13, but I usually end up liking a lot of Nicole Kidman movies that I only watched because it was during one of those free premium channel cable weekends (Like "The Others". That movie was awesome!).

I hate her fake American accent. Some people can get away with it. But other actors slip back to their native accent when they're being emotional.

The story is about a US Space Shuttle that crashes back on earth and then people start getting a strange form of the 'Flu'.

Apparently, it was a remake (of sorts) of "Invasion of the Body Snatchers". I never saw that, so I can't say.

I can say that you probably know the story. People get infected, they start changing & Dr. Carol Bennell (Kidman) tries to save herself and her son from being infected.

I liked the movie. It's worth a rent. But I really don't feel like talking about it anymore.

There's a Dr. Who marathon on Sci-Fi right now and I have a lot of episodes to watch on DVR.