The Darkest Evening of the Year 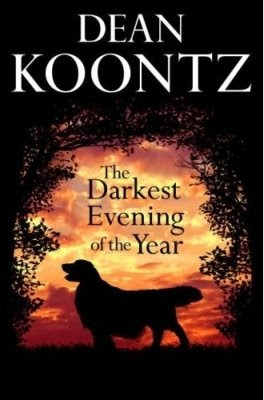 am currently reading "The Darkest Evening of the Year" by Dean Koontz.

It's about a woman, Amy Redwing, who founded an organization to rescue abandoned & endangered Golden Retrievers. It starts out with her driving in the middle of the night to rescue a dog from a man who is abusive to his family and has already killed one dog.

The dog is named Nickie. The first time her BF sees her, Nickie is surrounded with a golden "halo" of light.

When Amy gets home, the 2 Goldens that she already has (Fred & Ethel) act differently towards Nickie than they do to other strays that Amy brings home. No butt sniffing. But Ethel does keep bringing Nickie toys until Nickie finds one that she likes. Amy notices that all the lights in the house are on when she had only left one on.

Also, there's some crazy pyromaniac beeyatch who has to have sex in total darkness and then burn stuff and/or people afterwards with her boy toy.

Here's an excerpt from what About.com said about the book:

"No one is surprised when Amy risks her life to save Nickie, nor when she takes the female golden into her home. The bond between Amy and Nickie is immediate and uncanny. Even her two other goldens, Fred and Ethel, recognize Nickie as special, a natural alpha. But the instant joy Nickie brings is shadowed by a series of eerie incidents. An ominous stranger. A mysterious home invasion.

And the unmistakable sense that someone is watching Amy's every move and that, whoever it is, he's not alone."

So far, it's very interesting. I can't wait to find out why Nickie is such a special dog and what the hell that pyromaniac chick is up to! :-)

Labels: authors, books, Dean Koontz, The Darkest Evening of the Year
Email ThisBlogThis!Share to TwitterShare to FacebookShare to Pinterest