Well, that's not happening to me...

s I was checking Twitter, I noticed that Kathy from the Junk Drawer had tweeted about Entrecard scamming members.

So I went to check out the article.

The author said (among other things) that he is no longer receiving the 25 credits for blog posts every 3 days. 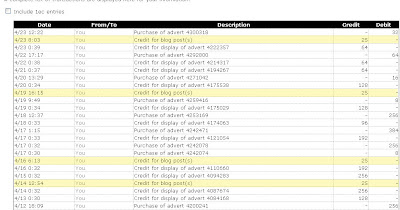 As you can see, I am. Surely I'm not the only one.

The author also said that you don't get credits for dropping on blogs with paid advertisements.


That is possible, but today I dropped, according to EC, 251 cards. I know there were some blanked out cards on some of the blogs that I visited. One of the Entrecard Moderators (or whatever) said that the ads were probably black from my Adblock plugin.

I KNOW I didn't drop 300 cards today (yesterday), I dropped on the cards in my inbox twice (which is about 50 cards each time) and then I dropped on my favorite EC Blogs.

Then I got credit for every time a card was dropped on me. 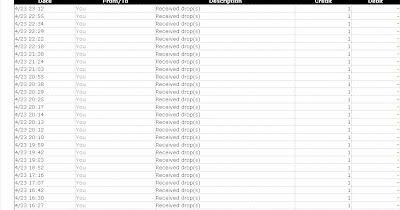 So...what am I not getting credit for?

If the problem is paid ads, reject them. I have rejected about 50 of them, and I haven't received any penalties or experienced any problems. If you want to get credit for drops on your blog, don't accept paid ads.

I'm not saying that you don't get credit for dropping on blogs with paid ads, but since I didn't actually count the blogs on which I dropped, I have no idea.

People are dropping out of Entrecard like it's a crack house about to be raided by the Popo.

But don't write articles falsely accusing them of doing something that they clearly are not doing.

Labels: Entrecard
Email ThisBlogThis!Share to TwitterShare to FacebookShare to Pinterest