This is one of the few times I've watched ALL the shows that my DVR recorded on the same night that they were recorded. I've even watched some shows that I would not have otherwise watched.

I saw "The Exterminators" for the first time. There were 3 episodes in a row. It's about a family that has an extermination business in Louisiana. The main guy, Billy, is an animal lover so he'd rather trap than kill. He works there along with his mom, dad, wife, brother and sometimes his brother's ex-wife that everyone in the family hates.

The thing that made me decide to record the series was when Billy had to get rid of a 7 foot beehive and instead of the usual white bee keeper suit, he pulls out black leather, a black feather boa and a black skull Halloween mask.

It's like a rock star on a reality show & a soap opera (with Billy's ex-SIL) rolled into one. Check it out!

What else did I watch?

I don't even remember.

I had to go to Wal-mart today and it seems like every child under 5 was in there screaming.

I should know better than to go to ANY store on the first of the month, because that's when all the SS and Disability checks come, so everyone shops on those days. 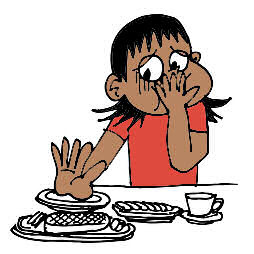 I had a headache when I went there, but by the time I left I just wanted to cry. Or vomit. Or both.

I'm tired of this shit. All week I've been nauseous. Like "I can barely eat sick to my stomach" and I don't know why. I finally took a phenergan tonight to help with the nausea, which usually knocks me out. No such luck tonight.

The good news is that if I stay sick like this for the rest of the month, I should be able to get back into my "skinny jeans" which are NOT skinny. Just skinny for me, LOL.

I wish I could throw up, though. I usually feel better after I throw up.

I'm going to try and finish Audition tonight. I'm up to the George W. years... The writing doesn't look small, but it's taking me a long ass time to get through this book even though I read at least 50 pages a day. I would have been done with a Harry Potter book last week and this book has about 200 fewer pages than the average HP novel.

I also got a novel by Kathy Reichs (?) the one on whom the show "Bones" is based. That writing is extremely small. I read a few chapters.

Maybe that's what gave me the damed headache that I've had forever in the first place!!

My eyes are getting old.