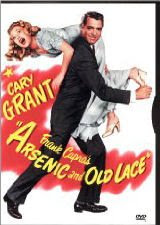 his was an enjoyable movie. It made me laugh out loud only once, but I found it amusing. I guess it's what you'd call a "farce".

Mortimer Brewster (Cary Grant) has just married the daughter of a minister. Brewster is a lifelong bachelor. He has even written books talking about how marriage is unnecessary and antiquated (or whatever, it doesn't matter).

So he stops by to see his 2 aunts & let them know that he's married their next door neighbor's daughter. His aunts seem very ditzy. Brewster is looking for something that he's left at their house and while he's looking for it, he finds a dead body in the window seat.

He's shocked, but at the same time, he doesn't want to scare them with the news that they have a dead body in their house. When he finds out that they know about the body, and that they've killed 11 other men & buried them in the basement, he starts wondering how to cover it up.

The comedy comes in with Brewster's reactions. He has 2 brothers. One who lives with the aunts and thinks he's President Teddy Roosevelt and another one who's a homocidal maniac and keeps getting plastic surgery and currently looks like Boris Karloff? Or Lon Chaney? I don't know. One of those old horror movie actors.

The crazy brother...I mean, the homicidal brother comes back with his plastic surgeon and a body in the trunk. He wants to hide it in the basement of his aunt's house until he finds out that there are already 12 other bodies down there.

Mortimer wants Murderous Bro out, Teddy Bro committed, and tells his new bride that he can't go through with the marriage because insanity runs in his family. There's a whole lot happening in this movie, LOL.

I'd tell you more, but I have a really bad headache right now so I'm going back to bed.