Please go in, Baby. It would make Tater so happy. 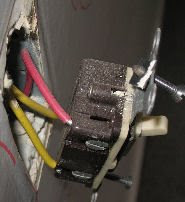 his is what I heard the other day when "Tater" was here painting the drywall where the new cabinet is supposed to go up.

Tater has a real name. He told me once, but I forgot. So I asked him again and he said "Tater".

Tater didn't stink like others ('handy men') that have been in here. Which was nice.

His talking to himself was quite amusing.

He was replacing the plug (that was still working) in the wall where the new cabinet will be.

Apparently, whomever wired my apartment in the first place (50 years ago) didn't know what they were doing either. There are supposed to be 4 wires or something. Or maybe 3. But I do know that there was one live wire that they just wrapped around METAL at the bottom of the actual plug.

So every time I plugged in the George Foreman, I was risking electrocution without knowing it.

Since my hall light (going up stairs) stopped working a couple of months ago, I asked Tater to fix that one too.

So the gist is that the lights in my kitchen don't work. No idea why.
The hall light set off sparks a couple of times and it still doesn't work. It's now hanging out of the wall with electrical tape covering the exposed live wire.

An ACUTAL ELECTRICIAN is supposed to be here next week (we'll see) and fix all of my outlets that don't work.

I'd be pissed if I hadn't enjoyed listening to Tater talk to himself so much, LOL.

And Tater is loaning Evan some Star Wars DVDs that he has that aren't the usual.