My momma tried to kill me! 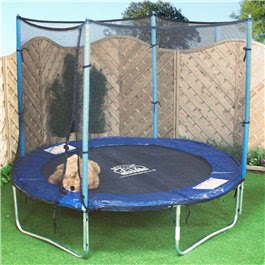 esterday Evan asked if he could go to Omah's house with his cousin. I said sure.

I picked up the phone to call my mother & let her know that the boys were coming and had a message from her. She needed some Attarax (the Benadryl x 10 that I told you about). So I put on some clothes & drove over there. Passed the boys on the way. I was happy to see that 1) they had water bottles with them and 2) they were walking facing traffic. I waved at them & went on MD's house, LOL. I got there at 1 pm.

I gave her 2 pills. She said she'd take one at bedtime since they knock us out. I was about to leave & she said "Are you leaving?" I said "Yes, because if I sit in your squishy couch I might not ever get up again."

But I stayed and cut some coupons from her Sunday paper & the younguns came to jump on the trampoline.

So I went outside to make sure that they weren't both jumping on it at the same time. Stayed there long enough for MD decide she wanted to grill for us. I had to go to the store & get maters, taters, beef & buns. (That's how I remembered it, LOL.)

Entyway, after she was done cooking the burgers I went in to wash my hands and she had LEFT HER SHOES IN THE MIDDLE OF THE FLOOR. Of course I tripped over them and fell into the bathroom. It's the size of a closet.

So I had to lay on the floor squished between the toilet and the wall while the pain stopped being so painful.

I have two boo boos on my knees from rug burn.

She wouldn't kiss them.

Me - See, even as I was falling, I was considerate enough to spill my soda in the sink so you wouldn't have to mop and you won't even kiss the boo boos that you caused!
Evan - Why are you trying to kill my mama?
Cousin - Yeah, Aunt MD, why you trying to kill Evan's Mama?

Anyway, after we ate I told the boys that they'd better get started walking home if they wanted to make it before it was dark.

I bet they thought I was going to drive them home.

Hell NO! I soaked Evan with the hose and got Cousin a little wet too. No way they were sitting in my Hoopty!

I sat at MD's and watched almost an entire episode of "Gene Simmons' Family Values" before I left & passed them on the way home.

They were yelling something at me.

I didn't hear them. Had the radio up too loud. *giggle*

So now they're outside playing because Cousin's mother is gone somewhere.

If you hadn't guessed, I'm writing this on Sunday while I still remember. I'm fiddnuh watch "The Great Debaters" or whatever it is with Denzel Washington. Borrowed it from MD. She hadn't even opened it yet...

She just watched "I am Legend" that I gave her (months ago) this morning. *rolling eyes*