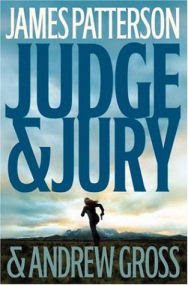 started reading this last night (Sunday, May 18). I'm only 30 pages in, so I'll just quote what it says on the book jacket:

THE JUDGE IS TERRIFIED OF THE DEFENDANT.
The case quickly becomes the new Trial of the Century. Mafia don Dominic Cavello, known as the Electrician, is linked to hundreds of gruesome, unspeakable crimes. Senior FBI agent Nick Pellisante has been tracking him for years. He knows Cavello's power reaches far beyond the courtroom, but the FBI's evidence against the ruthless killer is iron-clad. Conviction is a sure thing.

SO IS THE JURY.
As the jury is about to reach a verdict, the Electrician makes one devastating move that no one could have predicted. The entire nation is reeling, and Andie's world is shattered. For her, the hunt for the Electrician becomes personal, and she and Pellisante come together in an unbreakable bond: they will exact justice-at any cost.

THE VERDICT: RUN FOR YOUR LIFE.
James Patterson spins an all-out heart-pounding legal thriller that pits two people against the most vicious and powerful mobster since John Gotti. Judge & Jury is a stunning feat by "one of America's most influential authors" (New York Times).

When I went to the library, I got books that didn't look or sound familiar to me. But when I went to Amazon to get the photo, it said I already own this book...

I'll find out when I get more into it, and it all starts seeming familiar. But I've looked on all my book cases downstairs and I don't see it. It could be upstairs, but I really don't want to know bad enough to climb the stairs, LOL.