xcept I got a call from the school nurse yesterday saying that Evan was having problems with his asthma. So I looked for his inhaler (no idea where he puts these things) and ended up calling the pharmacy for a new one.

So I told him that he'd better not lose his $40 inhaler. And he took 3 breathing treatments last night & one this morning. 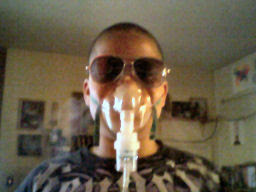 He refuses to take his allergy pills because he says they make him sleepy. So, I tell him to take them at night. That seems obvious to me. But NO. He doesn't take them at all and his asthma gets aggravated.

Just like him going to football practice and inhaling all the pollen & shit that aggravates his asthma. But since I bought freaking cleats 2 years in a row, HE IS FINISHING THE EFFING SEASON.

Or is it all kids who refuse to take the medicine that they need to stay healthy?