an you believe it's March already?

Anyway, here are my top droppers for February. 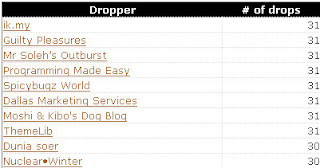 I don't know how one can be chosen if 8 people have the same number of drops, but whatever. ik.my.blog has a URL shortening thingee. I tried it. It works, but I don't think I'll be changing my url to http://ik.my/Angelika. 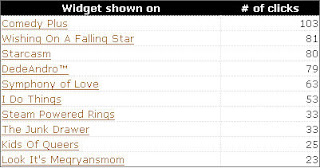 Comedy Plus had the highest number of drops in February (60 + 43), but Starcasm kicks ass with 80 clicks on ONE campaign.