Wheeeeeeeee! I got my camera phone!

oday I went to Wal-Mart with MD.

She needed a printer dock for her Kodak Easy Share camera. WHY she didn't get the whole thing (printer & camera) all at one time, I'll never know. She also had NO memory card in the camera, so she was only able to take 6 pictures.

She decided not to spend that much money today. So I just talked her into getting a 1mb memory card that she could take back to Wal-Mart and have the pictures developed.

Anyway, she said "When do you want your birthday present?"
Me - Today. Or on my actual birthday.

Here's the second picture I took today. It's of the desktop Evan picked for this week. We've decided to switch desktops every Sunday because he said having Hugh stare at him all the time freaks him out. 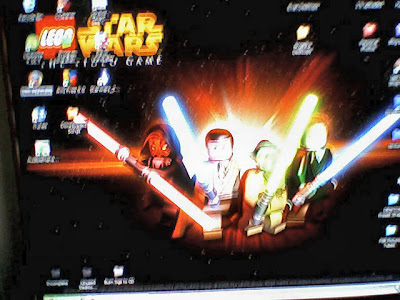 I didn't expect a picture of the computer screen to come out well, but I think holding the phone steady might have helped, LOL.

Anyway, now I can start taking pictures of the people I see who look like celebs or dopplegangers of people I know online and IRL!