What I did on my birthday

y back was hurting, so I didn't go out for my free birthday lunch with MD. Taking me out to eat is what she does now that she no longer really cooks (except for Prince Evan). She has agreed that it's not my fault that I don't feel good on a particular day and that she will take me out on a different day when Evan is in school, which drew a very angry "Humph" from Evan. HA! She took him out for Chinese food on MY birthday, so I don't know what he's humphing about!

I owed her $20 (From when we went to Krystal because I didn't have any cash). She made it clear that she wanted her money ON FRIDAY. 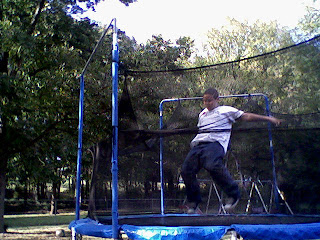 So I went to the bank & got her money, then called her and told her to have Evan meet me in the driveway so I could give him her freaking money. But I also wanted to look at the Circuit City paper because usually, movies released that week are 13.99 and if you bring the ad to Wal-Mart, you can get them for that price.

Anyway, I ended up getting out of the damned car.

And staying until about 8 pm.

We sat outside. I took so many pictures of Evan on the trampoline that I filled my phone up.

We all played ball. With those big plastic balls. We were sitting and he was standing. First he was just tossing it to me, but MD got jealous so we included her in our game.

He threw the ball straight to her. But he'd always throw it to the left of me or over my head. Because he's a suck up.

Anyway, MD told me she had a present for me. 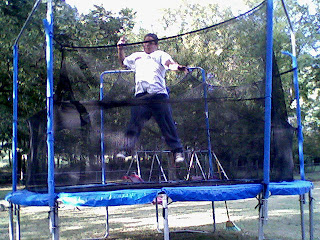 Me - But you already got me a camera phone!
MD - Well, this is stuff I'd already bought.
Me - Ok

So I got a bath set (bubble bath, shower gel, bath salts, lotion and body spray) of gardenia scented stuff. How she knew I loved gardenia, I'll never know. It smells so good. A t-shirt from Evan's school (I guess so that the next time we go out to eat, we will all match...) and 2 Bras. She buys the expensive ones, so that's cool. Now I have 3 bras to wear when I care about how my boobs look, LOL. 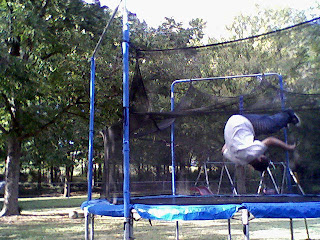 Then I had a turkey sandwich on wheat bread. I never eat wheat bread. But her wheat bread didn't taste like wheat (except for the crusts) so I might do something else for my health and switch to wheat... And a piece of blueberry cake. She was too lazy to put the muffin mix in the individual muffin cups, so she just put it in a 9x9 pan. Still tasted good.

Last night I slept on an ice pack since MD's jank Darvocet & the heating pad aren't working. My back feels much better.

Here are a few more of the pictures I took of Evan. The one where he's smiling is my favorite. :-) 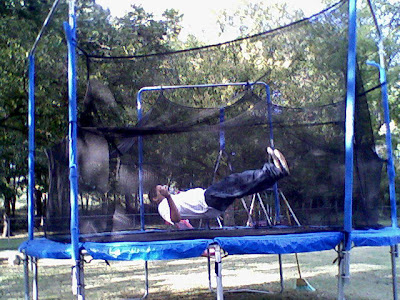 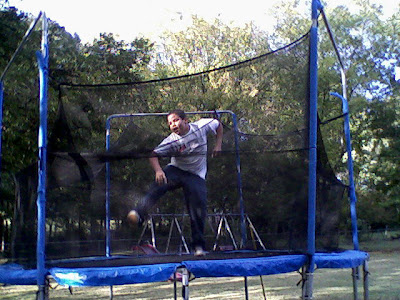 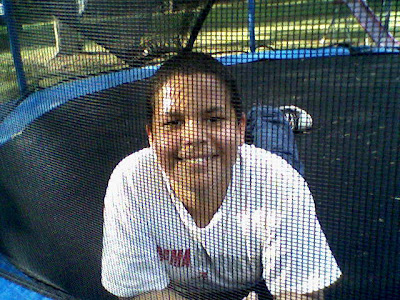 Labels: Health, Life, My Birthday
Email ThisBlogThis!Share to TwitterShare to FacebookShare to Pinterest