My momma took me out for my birthday lunch.

irst, we went to the pharmacy to get our free flu shots.

I felt a fake boob. They had something for women (Breast Cancer Awareness Month) to see if they could feel the...what do they call them? Nodules? Whatever. She said I was the fastest person to ever find one and that I was the only one to find both of them.

I wonder now if that's what fake boobs feel like... 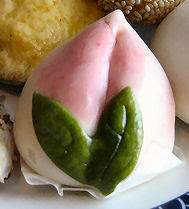 After that, MD took me out for my birthday lunch at the Chinese Buffet. I tried Dim Sum for the first time. I should have taken pictures while I was there, but I forgot. They had the biggest goldfish I've ever seen. It was like 1/2 a pound, at least.

Anyway, the Dim Sum was like biting through plastic wrap to taste a barely sweet mushed up pinto bean.

It looked waaaaay prettier than it tasted. That picture isn't the exact one I tried, but it looks just like it.

I made MD try it. We both spit it into our napkins.

I wonder if the one I got just sucked, or if it's always like that?

I got Rick Rolled by my own iTunes...

"That's just the way it is" by Bruce Hornsby had been running through my mind all morning (no idea why) so I put on my 80s playlist. Then after "True" and "Total Eclipse of the Heart", Rick Astley started playing. :-)

I still like Rick Astley. I don't care what you say! And I miss his freakish dancing, LOL.