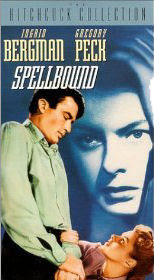 watched this movie on Ingrid Bergman Day on TCM. IMDb.com gives the plot as:

"A female psychiatrist protects the identity of an amnesia patient accused of murder while attempting to recover his memory."

It starts with Dr. Constance Petersen (Bergman) playing a relatively new psychiatrist at a mental hospital. With all the things her co-workers say about you, you understand that she's an "Ice Queen" and she never shows any emotions to her patients or her fellow doctors.

One day a new psychiatrist comes to work there, Dr. Anthony Edwardes (Peck).
Constance immediately develops a crush on Dr. Edwardes. He has strange reactions whenever he sees dark lines against a white background. Once he practically yells at Constance for making lines on the white tablecloth with her fork. He does this in front of all of his co-workers.

One day, when all of the doctors are operating on one of Edwardes' patients, he passes out. It is then that everyone begins to suspect that Edwardes isn't who he says he is.

While she's taking care of Edwardes after his 'spell', Constance compares the signature in his book to the signature on a note that he left her. She sees that they are not the same. After he leaves the hospital, she tracks him down. She realizes that he is not Dr. Edwardes, but she believes that he has amnesia and a guilt complex about something that happened to him in his childhood.

While the police are looking for this "Fake Dr. Edwardes" (they believe that he murdered the real Edwardes and took over his identity), Constance takes him to the home of one of her mentors. She is determined to help him remember who he really is, where the guilt complex comes from, and what really happened to Dr. Edwardes.

This movie had 3½ stars in the guide, and I would agree with that. It was odd seeing Gregory Peck so young. I'm used to "Atticus Finch". This young Peck reminds me of Anthony Perkins.

There was a twist in the movie. When it got close to the end, and Constance had finally helped him figure out his name and what had happened to the real Dr. Edwardes, I thought that the movie was over. It wasn't.

I liked the twist and the ending. I enjoyed the entire movie even though I kept thinking "Is Ingrid Bergman Isabella Rossellini's mother? She sure does look like her!" (Yes, Bergman had an affair with director Roberto Rossellini.)

I have at least one more Bergman film to watch & review. It's with Cary Grant. I can't wait! :-)