have been very sleepy this weekend. Friday night I took the phenergan 'just in case' because I get motion sickness a lot when I roll over in bed?!?! Fine.

I don't even want to talk about it anymore.

Isaac Hayes died. The guy who sang "Shaft". The Chef on Southpark. He was only 65. The ticker on my DVR said he died of unknown causes right beside his treadmill. This on top of Bernie Mac's death from pneumonia and he was only 50. :-(

I was going to write about the upcoming reality shows "Outsider's Inn" (Bobby Brown, Maureen McCormick aka Marsha Brady and Carnie Wilson) and Season 2 of Gone Country. But I don't feel like it.

Here's one of the 12,000 superheroes that Evan made from HeroMachine that Cardiogirl blogged about last week. He didn't literally make 12,000. But he made enough so that I had to give him his own folder on my desktop, LOL. He also informed me NOT to save anymore stuff I think he might like in his bookmark folder. Apparently, it distracts from the 3000 Jedi/Stupid Crap youtube videos he has saved... 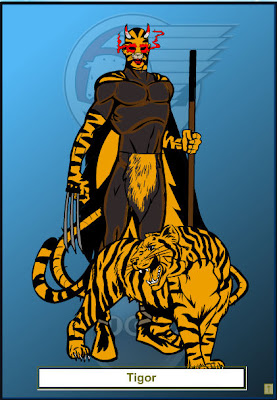