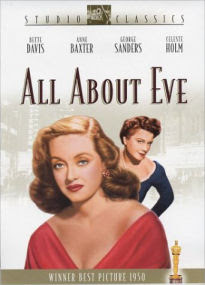 riday night Evan and I stayed up until at least 5 am. We were watching "The Others" with Nicole Kidman. I was falling asleep but the effing commercials were so loud and bright that I woke up every time there was a commercial break.

I saw "All About Eve" on the schedule (on TCM) & ended up taping it because of Bette Davis and it had 3½ stars. IMDb gives the plot as:

"An ingenue insinuates herself in to the company of an established but aging stage actress and her circle of theater friends."

The version I taped was black & white. But, thankfully, no commercials.

If you can get past the overly dramatic acting in it (it was the '50s, after all) this is a really good story.

Image via WikipediaBette Davis plays Margo, a very successful Broadway actress. One day, her close friend Karen (played by Celeste Holm) sees a young woman standing outside the theater waiting for Margo. The girl, Eve (played by Anne Baxter), adores Margo. She comes to see every single performance of the play in which Margo is currently starring.

THE SAME NIGHT that Eve is introduced to Margo, she tells a sad story about the difficult life she's lead. Margo takes pity on her & lets Eve move INTO HER HOUSE.

Not long after she starts managing Margo's affairs (business & personal) she sets up a midnight (4 am in NY) long distance call to Margo's boyfriend in California for his birthday. She "forgets" to tell Margo about it. She also sends the BF a telegram from herself & plans a birthday/welcome home party for the BF (I can't remember his name.) inviting people that Margo does not like. Margo finds out about the party during the midnight phone call.

Margo gets drunk at the party. She says some unpleasant things about "Sweet, innocent Eve" and BF & Karen stand up for Eve. At the party, Margo tries to get Eve a job working for someone else.

After the party, Karen sets it up so that Margo will miss her next performance and Eve can go on as her understudy.

'Somehow', the press and all kinds of people find out about Eve's performance.

One of the main "society" reporters in NY gives Eve a glowing review & basically accuses Margo, "the mature actress" of trying to hold the "fresh new talent" back. But he also asks her some trick questions about her background to be used for the purposes of blackmail later in the movie.

I think this movie could have been made today. It was great. In spite of the acting. In spite of the fact that Eve got slapped and reacted 2 seconds after the slap. In spite of being black & white. It is a little like a soap opera, but it's Bette Davis!

There's a cameo from Marilyn Monroe in the movie. A lot of the faces looked familiar to me, but when I looked at their resumes on imdb, I can't remember seeing anything else they might have been in with the exception of "The Twilight Zone" (wasn't everybody on that show at some point in their career back then???)