just checked my voice mail about an hour ago. She had called & left a message.

Apparently, when I told Bro that Least Favorite Uncle told me that she was still at the hospital, he was thinking "Why the hell would she ask him where she was? Why not Omah or Favorite Uncle?" That's why he was looking at me like I had 2 heads.

She had chest pains & they wanted to make sure she didn't have any blockages. She didn't.

I told her that we had come over Thursday to tell her that we were going to cook the Bacon Cheeseburger meatloaf for her. She said we could do it tomorrow. I said "It's already in the oven, but we'll bring you some Teriyaki Ribs tomorrow after Evan's band concert." 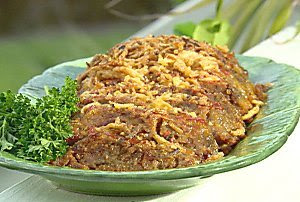 The meatloaf was sooooooooo goooooooood. The recipe calls for 1 lb of meat, but with 8 oz of cheese & all the other crap it seemed like it would be too much for that little bit of beef. So I used 2 lbs. We will have meatloaf samiches for days to come, LOL. The french fried onions on top really made it beyond belief. And we had mashed REAL potatoes.

Evan said that he hadn't expected them to be that good...

He has apparently forgotten that I always "put my foot in it" when I cook! But then I don't cook a lot these days.

He did most of the cooking.

BTW, DinometerDeb asked if it happened around here that someone shot themselves at Wal-Mart. It didn't happen in Chattanooga, but close enough. Here's the news story about it. From WRCB TV.

A busy shopping day turned chaotic in SomeTown, Tennessee Friday. Around Noon Central time, Sometown Police say a 19 year old man walked into Wal-Mart, purchased a .22 caliber rifle and three boxes of ammunition, then shot himself in the parking lot.

After looking at security camera video, police say he sat in the vehicle for a few minutes, then got out, walked a few feet away and collapsed. One eyewitness working nearby said the scene was a frightening one, but she's most worried about what could have happened.

"It really did scare me because he could have got angry and shot up the whole area," said eyewitness N---- W----. "That could have been dangerous for a lot of people."

Locally, there is help for folks thinking of suicide. Call Contact Chattanooga at 266-8228.

So, tomorrow I get to go to hear Evan's last band concert of this school year. Yay.

Do I sound excited?

MD said she didn't feel like coming with us. I'd just better remember to bring my ear plugs. When he was in elementary school they had a Christmas concert every year. With frigging bells. Those bells felt like ice picks being stabbed into my ears so I always left the building until that part of the concert was over.

I don't know how good (or bad) this concert will be. I really don't want to go, LOL.

Just one of the joyful duties of motherhood, I reckon.