I guess I'm too impatient.

ecause it's only been 3 days since they started giving me a new bathroom.

When they were just supposed to replace one cabinet in the kitchen... 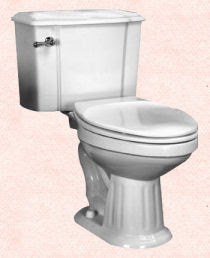 Don't get me wrong, I'm glad that they're doing it. I like my new commode. It will be irritating to clean, but it's prettier, LOL.

The thing is that years ago when my toilet was leaking, (with the old landlord) they came & fixed it & put down a new floor.

What I didn't know is that they hadn't ripped up the old, water damaged, saggy floor & beams. And one of the pipes in the wall was leaking too, but I couldn't see or hear it when I flushed the toilet.

So when my landlord came to replace the cabinet (that was water damaged from the toilet's leaking) he saw saggy floor, warped beams & realized that he needed to put in a whole new floor and new beams before I fell through the floor.

It was on Thursday that the maintenance man finally finished putting in the floor & toilet & vanity. But he didn't get the toilet hooked up and usable until 11 pm.

That pissed me off.

So he came back Friday.

He put up the new cabinet (smaller than the old cabinet), but still no water in the sink.

I DO NOT LIKE BRUSHING MY FUCKING TEETH IN THE FUCKING TUB OR THE KITCHEN SINK.

I've been in a bad mood since Thursday.

WHYYYYYYYYYYYYYYYYYY does it always take them so long to fix anything?!?!?!? They (workmen, landlord) keep coming in my fucking house so I have to keep the air turned down lower than usual or it would be on all effing day. (Thursday I had gone to MD's house to use the bathroom & when I came back, lights were on, doors were wide open, windows were up, air was on, and no one was here???

Evan asked me if I had PMS.

Poor kid. I don't mean to take it out on him, but I'm SO FRUSTRATED!

I do not like having strangers in my house in the first place. Especially not fuckers who track dead grass & mud all over my carpet. Especially men who take my geedee curtains down, open the bathroom window & then leave for the day without having finished their job but leaving their tools & cigarette butts in my new commode.

I swear to God, one of these days I won't be able to be patient with these fucking idiots anymore.

I HATE THIS SHIT!