ince you seem to have the inability to COMMENT on my videos, I'm typing what I'd ordinarily ramble about on YouTube. 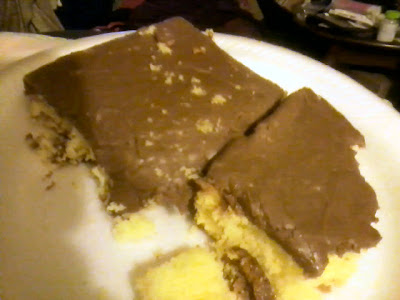 I had a jing cai Thanksgiving.

Mommy Dearest made ME a chocolate cake, not THE BOY (aka Prince Evan when @ Queen Nana's house).

I stayed for six hours. Because I wanted The Rutting Food Hoover Boy to eat so much that we did not get home & he'd tell me that he was hungry.

Apparently, he really stuffed himself because we ate @ 1:30 PM and the only thing he ate when we got home was a piece of the cake that MD made for me. It's in This Video which you will neither comment on HERE or on utoob because you hate me.

I had a kuang zhe de dream on Thanksgiving Eve. It is HERE. Which is also posted on this blog, but you won't comment on that either.

MD & I had a 'discussion' about when I was 13 she made me wear kuh wu K-Mart shoes instead of buying me the Reeboks that all my friends were wearing and when one of my friends gave me her old pair, HER HUSBAND (aka my father) made me give them back because "We didn't take charity."

One of 2 black families living in an upper middle class neighborhood, I KNOW we could have afforded a ruttin pair of Reeboks, but noooooooooooo, only her FAVORITE SON & FAVORITE DAUGHTER got the name brand Adidas shoes & niu fen.

SHE was spoiled. In the 80s we had a gao gan floor model TV on which we could receive phone calls. Futuristic stuff, right?

Anyway, when MD wanted a microwave or a VCR or a VAN, she got it. When Daddy Dearest wanted to eat pork & pork & caramel cake and pork & drink kuh wu FRUIT PUNCH KOOL-AID EVERY GORRAM DAY THAT I STILL CANNOT STOMACH, DD got it.

When we could have been stationed in NEW YORK CITY where I could have taken over Tempest Bledsoe's part on The Cosby show, we didn't because MD didn't want to.

Since I am LITERALLY feng le, MD refuses to believe that I can't remember 90% of the ai ya tian a that was and is my life, and that I am fang pi, we had yi qi shen hu xi.

But anyway, now my bu lang bu you hands are cramping and I didn't say 1/4 of what I'd intended to say.

I hope you're happy, zao gao!

YOU'D BETTER COMMENT MA SHANG OR I'M GETTING A WITCH DOCTOR TO PUT SOME VOODOO ON YOU SO YOU WILL HAVE GENITAL LICE UNTIL I HAVE FORGIVEN YOU FOR ABANDONING THIS POOR DISABLED WOMAN (ME) THAT CAUSED HERSELF PAIN FOR YOUR GORRAM RUTTIN FEI FEI PI GU!

BTW, I've been watching a lot of Firefly lately. I have embraced my inner nerd. ☺