fter a year long wait (or so it seemed), the new "season" of Ninja Warrior premiered last night.

I watched all the usual idiots, including G4's Olivia Munn (WTF was that?!?) knowing that eventually, my persistence and loyalty would pay off and I would get to see "my man", Makoto Nagano.

So finally, in the 4th episode, Nagano comes on.


"It's ok Makoto, you're still my Japanese boyfriend."And falls.

I was waiting to see him get to the 4th stage. Seriously. I mean, I knew deep down inside that by the 4th episode with only 3 or 4 people making it to the 2nd stage, that it probably wouldn't get that far, but I never expected Nagano to go down in the first stage.

I was so disgusted, I didn't even watch the rest of that episode or the next to see who won.

Evan had immense fun teasing me about Nagano's failure.

And now I have to wait another eternity to see a new episode again. 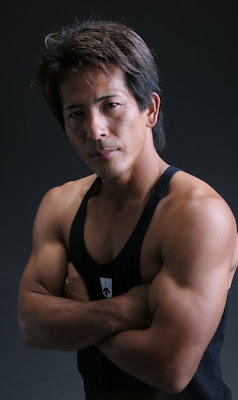 It's ok Makoto, you're still my Japanese boyfriend. You'll do better next time...