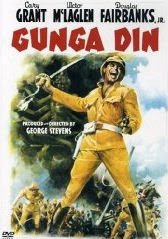 was searching for more movies starring Cary Grant when I saw Gunga Din on TCM's schedule. Here's the Quick Review

Gunga Din
Starring: Cary Grant, Douglas Fairbainks Jr., Joan Fontaine
Director: George Stevens
Genre: Adventure/Comedy
Plot from IMDb.com: "In 19th century India, three British soldiers and a native waterbearer must stop a secret mass revival of the murderous Thuggee cult before it can rampage across the land."
Should you see it? Only if you're extremely bored and C-Span & The Weather Channel have no signal.
{/end quick review}

It was described as an adventure movie. But some of the plot is supposedly based on historical fact. And then there's a lot of comedy in the movie. Cary Grant has been the comic relief in most of the movies in which I've seen him. So it felt like the director didn't know if he wanted to make a Drama, Adventure or a Comedy.

My mother describes some old movies as "Snicker Flicker". I don't know if this is a term that is used by anyone else, but for me, it calls up of images of silent movies. Where the action is super fast & a little jumpy. ALL of the action scenes in this movie were "Snicker Flicker".

I didn't like it very much. I almost didn't finish watching it. I kept pushing "play" to see how much effing time was left and it seemed like I'd only watched 3 minutes since the last time I checked, LOL.

I didn't like that it looked (to me) like all of the Indians (in India) were just white people covered with brown colored paint. I know that they didn't have a lot of multicultural actors back then (1939), but it irked me none the same.

I didn't know if I was supposed to take this movie seriously, either. That bugged me.

I think I remember laughing once at something that Grant did, but I don't know. Maybe that's just because I expected him to make me laugh?

I was very disappointed. :-(